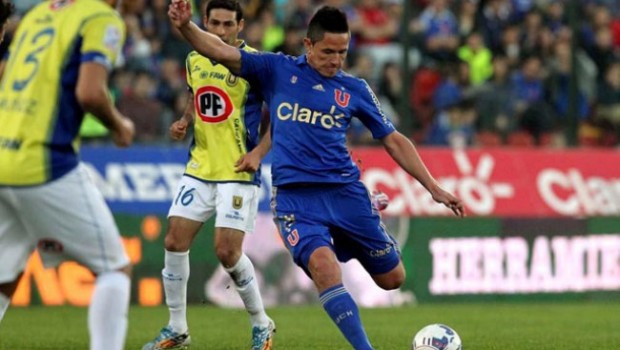 It´s looking more and more likely that the super clásico between Colo Colo and Universidad de Chile in a month´s time will be pivotal in the Apertura title race.
The two pacesetters keep on grinding out victories even when they are not at their best.
A case in point was la U´s 1-0 win against Universidad de Concepcíon at Santa Laura on Sunday night. Gustavo Canales´s 11th minute shot struck U de Conce´s Andrés Imperiale in the face and flew into the net for an own goal.
After that, the hosts lost their way and U de Conce had chances to force at least a draw, but they couldn´t take them.
It means Universidad de Chile maintain their three-point advantage over their arch-rivals, Colo Colo.
La U boss Martín Lasarte admitted: “Until the goal we played well, but after that we lost the ball and were inconsistent. We weren´t so brilliant today, but we got the job done.”
Colo Colo, meanwhile, eased to a 3-1 win in their lunchtime kick-off against Palestino in Valparaíso. The impressive Emiliano Vecchio set them on their way with an excellent finish and Jean Beausejour netted the second on the half hour when his cross from the left curled in off the post.
However, the former Wigan man´s joy was shortlived as he was sent off four minutes later for hitting Leonardo Valencia.
Nonetheless, Esteban Pavez struck a superb third before Palestino´s César Valenzuela pulled one back late on.
The only other team in with a sniff of the title are third-placed Santiago Wanderers, who lie six points behind la U.
They got back to winning ways with a thumping 4-1 victory against Cobresal. Roberto Gutiérrez struck twice, while Jorge Luna scored another screamer for the Caturros.
Lucas Simón continued his prolific form for fourth-placed Huachipato to make it ten for the season with two goals against Antofagasta. However, the acereros let slip a 2-0 lead after the 70th minute dismissal of new Chilean international Martín Rodriguez.
Unión Española climbed to fifth place on the back of a much-needed 3-1 win at O´Higgins. However, the gloss was taken off the victory by the controversial sending off of Nicolás Berardo.
Fuming at picking up two dubious yellow cards, the left-back pushed referee Carlos Rumiano and could be in hot water with the authorities.
Meanwhile, Universidad Católica eased the pressure on manager Julio César Falcioni with a solid, if unspectacular, 2-0 home win against San Marcos de Arica, who were seething over decisions that went against them in the build-up to both goals.
José Luis ´Ribery´ Muñoz netted both goals in the second half at a rain-soaked San Carlos de Apoquindo.
In the other weekend matches, Audax Italiano and Barnechea won 1-0 at Cobreloa and Ñublense respectively, while Unión La Calera and Iquique drew 1-1.