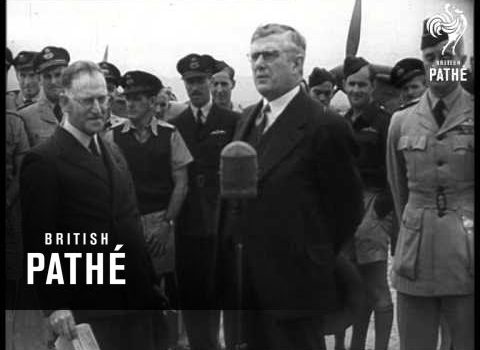 Evatt is my home suburb. Brent Ford continues his alphabetical journey through the suburbs in Canberra.

I live in Evatt, so it is somewhere I have had a decent explore of. It is a very large suburb. Due to this fact, depending where you live, your garbage might be collected on different days!

Evatt the suburb is named after Herbert Vere Evatt, a Justice of the High Court and Leader of the Opposition in the 1950s. Streets are named after those in the legal profession. #A2ZACT pic.twitter.com/Q2LmPzDWXf

Brent’s run took him in a loop using some of the main roads of the suburb, completing a circuit in the area around the shops. He could have easily done a whole extra circuit in other parts of the suburb. There are two ovals, two public schools and plenty of playgrounds around the area. That is before taking in the nearby Palmerville.

The suburb is named after Herbert “Doc” Evatt. He was a long term Labor politician, and as mentioned in the tweet, Leader of the Opposition, as well as a High Court judge. At 36, he was the youngest to take up that role. You can find out more about “Bert” in this biography.  Something that stood out to me, is that he was passionate about rugby league and cricket. “His knowledge of sporting statistics was, if anything, excessive.”

According to the same biography, Sir Owen Dixon was blocking his chances of reaching the head judge position in the High Court, so he moved back into the political game. Owen Dixon Drive is one of the key roads coming into the suburb. Gideon Haigh has also written a book about Mr Evatt – The Brilliant Boy. He led a busy life, including being involved in the United Nations in its formative years. He became leader of the opposition once Chifley died. You can see a number of the tributes to him after his death in 1965, though he was a polarising figure.

There is a small pub in Evatt, Herbert’s. Along with Ruby’s cafe as well as the local shops including take away, butcher and baker, they are giving some extra life to the area. The Evatt Primary School has also brought in The Nest, which includes a before-school cafe as well as family programs. The Feel The Power blog started their wander down near Ginninderra Creek, which seems so far away from the area around the shops.

If you need some reading material, there are quite a number of street libraries in Evatt. We have The Hulk and Superman just near us, with another on the edge of the bike track heading down towards the creek.

From Evatt, you can do a number of walks or bike rides, with anywhere in northern Canberra within reasonably easy access. Mt Rogers is a regular walk, while I have done larger loops taking in Gold Creek area. A large chunk of land near the suburb is currently CSIRO farming land, but one day soon enough I imagine they will be suburbs of their own.

One Response to A2ZACT With Brent Ford – Evatt