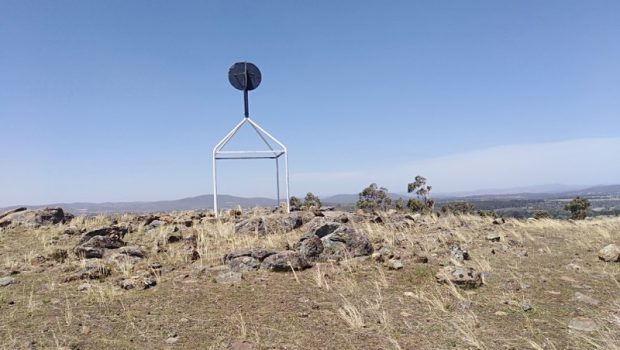 This walk combines a couple of hills in Nicholls and makes a circuit around part of the CSIRO research station.

Joining Percival Hill and Harcourt Hill can be done in a circuit. In this particular version I added in Palmerville as well. I’d done all the segments before and had written about them on this site previously, but I had decided it was time to try and join the dots.

I had Jasmine in the baby backpack, which maybe started as a good idea, but as the walk went on the wind grew stronger and it wasn’t such a good idea after all.

Baby backpacker out for a walk #Canberra

Palmerville was the first stop for the walk, which is an easy distance from home. I don’t think I really planned on going all that way when I began but I had the idea of walking for a good while and had sandwiches and things prepared.

Most of the visits to Palmerville I’ve just done the main circuit, which is well signposted with information about the European settlement in the area. I always enjoy reading about the Ginninderra cricket team.

I have put a couple of links to the Hall School Museum website as plenty of these areas along the walk get covered in great detail.

Where you come to the bridge over the once notorious Ginninderra Creek, there is another option to turn left rather than completing the circuit. I didn’t really know where that would take me, but gave it a go.

If you keep going, you will end up on the Barton Highway. That’s a bit of a change of scenery. From the fairy garden at Palmerville to all of a sudden needing to cross a busy highway. There are certainly better ways of doing this journey, but on this day it was straight across the highway.

Then it was time to start climbing. I’d been up to Percival Hill a few times before, but not from this side. What I did notice coming down was some signage about an odour control project. That’s something I remember from a previous version, going straight through some stinky swampland.

The area that I came up from is known as the Blacksmith’s Shop on the map. I don’t think you are allowed to go in there, but seems there’s still something left of it. Going up that was you get a good view over the Nicholls area. Seeing off to Harcourt Hill beyond the greens of the golf course I thought it might work to join things together.

Reaching the trig on Percival Hill the winds had started to pick up but they would prove to strengthen as the day went on. At 662m it’s not that a high a hill but gives excellent views over the surrounding area.

So to the surrounding areas we went. Firstly down the hill and past the golfing facilities. Things were not quite as straightforward as I hoped that might be as one can’t just gallop across the greens without the danger of getting struck by a golf ball. So there was a bit of to and fro to get where we needed to get.

It ended up being quite a distance to cross the suburban parts of Nicholls. The golf facilities which mean that you can’t go directly where you wish.

Once you’re near Harcourt Hill, there are certain streets that have small paths that lead into the bushland and a couple of areas have a stile to get over the fence. On this particular day there were some cows grazing by the far end of the reserve.

It seemed a good idea to cross the reserve and look for an exit down on to the bike track. Unfortunately there is no exit and just a very high fence. That one didn’t really work as planned. Eventually I was able to find a part of the fence that was low enough to clamber over. That wasn’t easy in itself either.

From there it was still a way to get back home but that was along a well trodden path which runs between Kuringa Drive and the CSIRO facility. I think I had some inkling to add in Mt Rogers too but enough was enough for one day.