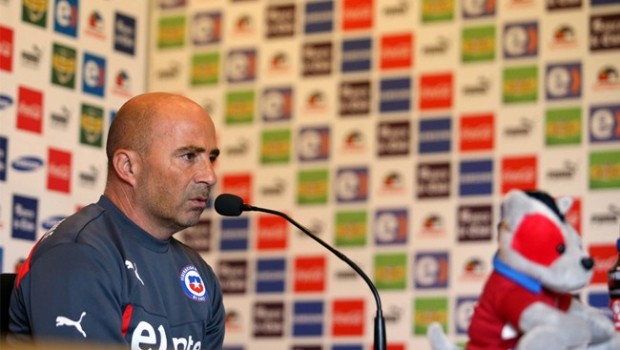 It might only be a friendly against Egypt, but there’s plenty at stake for Chile’s World Cup hopefuls tonight.
The Estadio Nacional clash is Chile’s penultimate match before the World Cup in Brazil and there are places up for grabs in the squad and in the team.
Injuries, lack of playing time and form are all factors under consideration by Chile boss Jorge Sampaoli, who needs to drop two players to make up his 23-man squad by Monday’s FIFA deadline.
It means tonight’s match is a golden opportunity for the starting XI and for those who come on from the bench to stake their claim.
Perhaps it’s in defence where the players have the most to gain – or lose – this evening. Osasuna’s Francisco Silva is set for another run-out as sweeper, while Swedish-born Miiko Albornoz gets a chance as the left-sided centre-back. Cardiff’s Gary Medel plays on the right of the back three.
Chile’s midfield plans have been hit by Arturo Vidal’s knee surgery and he faces a race against time to be fit for Chile’s World Cup opener against Australia in two weeks’ time. However, that gives Felipe Gutiérrez the chance to show what he can do tonight.
Charles Aránguiz also has the opportunity to show that he can step into the shoes of the injury-plagued Jorge Valdivia if the Palmeiras man can´t shake off the niggly injuries that have affected him.
Aránguiz will bid to be one of the creative sparks for La Roja and provide the ammunition for Alexis Sánchez and Eduardo Vargas.
Sampaoli believes that tonight´s friendly will be a good test for his side ahead of the World Cup.
He said: “Egypt are a very direct team and they beat Bosnia, who´ve qualified for the World Cup, recently.
“It´s an important parameter for us to see everything that we´ve been doing in training and to see what can happen to us in the tournament.”
Tonight´s match kicks off at 8.30pm at the Estadio Nacional and will be televised by Chilevisión.
Chile play their final warm-up match against Northern Ireland in Valparaíso next Wednesday.