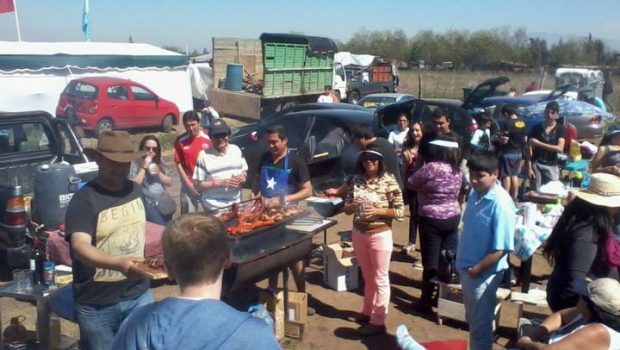 Tom Maher is an Irishman, who like many others that I met along the way, came through the doors of the I Love Chile offices. He had a passion for photography, and it’s great to see that he has been kicking on in that direction on his return to Ireland. We had a few adventures along the way, including visiting the Cementerio General and a September 18 celebration in Colina. He also filled in for us in our “Australian” team at the “Feria de Futbol” just before the World Cup.

To be honest I didn’t really have much expectations before going to Chile. I just had a desire in me that I wanted to keep travelling abroad after spending the previous summers in The US, Canada and India. I liked that the weather would be good, Spanish would be a great language to learn, and I guess I had a naivety and fearlessness/ignorance that it would all work out grand!

The earthquake of 2010 will always be something ingrained in my mind forever, but one moment that pops to mind was when I celebrated one of my birthdays with the other teachers in the English Institute we were working in. I was only in Chile less than a year and I was going through a bit of rough patch at the time. But I remember we got a table in Dublin pub, and despite knowing these guys only a few months, it was like we were best friends all our lives. You don’t think much of it at the time, but you miss it and appreciate it more when you look back on it years later.

Do you have any plans to return to Chile? What’s something you wish you had done before you went to Chile (to be more prepared)?

At the moment I feel like I need to move forward with my life in Ireland. One of the reasons I came home was to get a better chance at working in media, which was more accessible to achieve in Ireland, and I am on a career path which might make moving back to Chile very difficult. Life can be unpredictable though, so you never know, it could happen one day.

What’s something you wish you had have done while you were in Chile?