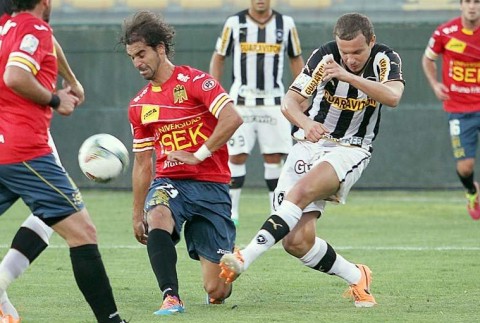 Unión Española and Universidad de Chile can book their place in the last 16 of the Copa Libertadores with good midweek results – but it won´t be easy against Brazilian opposition.

Brazil – José Luis Sierra´s Unión are the first in action and they´ve got everything to play for in tonight´s clash against Botafogo at the world-famous Maracaná.

Going into the game, the Brazilians lead Group 2 with seven points from four matches, while Unión lie second with six. It means that whoever wins will guarantee their place in the knockout stages with a game to spare. A draw, meanwhile, will keep things open until the final round.

Unión drew 1-1 at home against Botafogo in late February and the Brazilians needed a late goal to earn their point. However, the rojos can expect a much tougher task in Brazil and will have to work hard to maintain their unbeaten record in this year´s competition.

Unión boss Sierra said: “Fortunately, the other results in the group have helped us and that´s good. I hope we can classify as soon as possible. We´re going to go for it.”

If Unión don´t qualify tonight, they know that victory in their final group at home against Ecuador´s Independiente del Valle next Wednesday will be enough to send them through.

Meanwhile, Universidad de Chile only need a draw from their match against Cruzeiro at Estadio Nacional on Thursday night to reach the last 16.

Cruzeiro, surprisingly, have only picked up four points from four matches. In fact, their only victory so far was their thumping 5-1 home win against Universidad de Chile in February.

It means Cruzeiro must win to keep their chances alive going into the last round of matches.

Universidad de Chile captain José Rojas said: “We´ve got a tough game because we know it will be almost like a final. I´m expecting an open and very attractive clash between two teams going out to attack.”

The group finishes next Wednesday when Universidad de Chile visit Defensor and Cruzeiro host Real Garcilaso. If la U don´t earn the point they need against Cruzeiro, then the Defensor trip will be make-or-break.