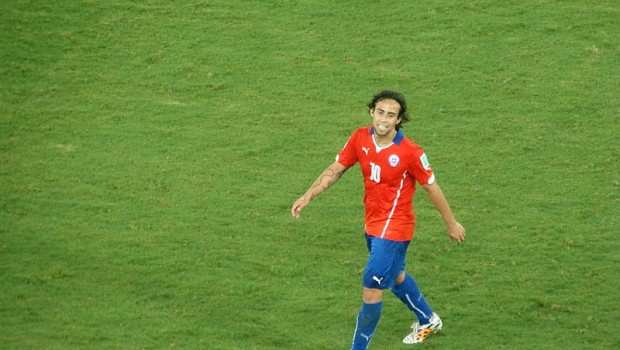 Jorge Sampaoli has announced his squad of foreign players to take on Venezuela and Uruguay, with Jorge Valdivia returning to the list.

Despite announcing his retirement from national team duties after missing the Brazil match in the World Cup, Palmeiras playmaker Valdivia is back in the nomination after Sampaoli convinced an end to his short spell at retirement.

Valdivia was brought back from international wilderness after the controversial “bautizazo” scandal, falling heavily out of favour with previous national team coach Claudio Borghi.

The announcement contains few surprises, with former under 20 captain Igor Lichnovsky coming into the side. Having been brought into the top flight by Sampaoli, the FC Porto man brings extra height to the defensive line.

One absence is that of Mauro Zárate. Having grown tired of waiting for the call from Argentina, the West Ham player declared he was available to be selected for Chile. Having won the under 20 World Cup and Olympic gold for Argentina, Zárate has never had the opportunity to represent Argentina at the top level. Despite the opportunity to call on him, Sampaoli has opted for players such as Fabián Orellana and Mauricio Pinilla to join Alexis Sánchez and Eduardo Vargas in battling for strike positions.

Chile host Venezuela on November 14 in Antofagasta, while Estadio Monumental will be the venue for Chile’s battle with Uruguay on November 18.

Looking towards next year’s Copa América, Chile will be interested in some of their South American counterparts results. Brazil will go on the road, playing against Austria and Turkey. Argentina are also in Europe, taking on Portugal and Croatia. Colombia join the party, seeing the USA and Slovenia.

Uruguay will host Costa Rica before they travel to Chile, while Venezuela will move north to face Bolivia in La Paz after their Chilean visit. Paraguay and Peru will play both home and away matches. Mexico and Jamaica are the invited teams for 2015. The Mexicans travel to Europe to play The Netherlands and Belarus, while Jamaica will be busy with their continental qualifying campaign, taking on Antigua & Barbuda and then Haiti.

Chile team for friendlies against Venezuela and Uruguay

2 Responses to Sampaoli Brings Back Valdivia for Chile Friendlies