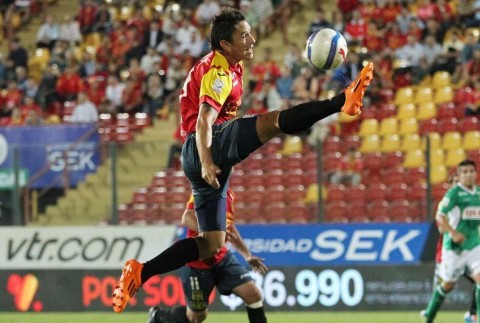 Buenos Aires – The rojos travelled to take on the team supported by Pope Francisco with a record of two draws from their opening two Copa Libertadores Group 2 matches.

Their chances of adding to their tally began to look remote when Mauro Matos gave the hosts the lead in the 21st minute. The Argetinians were well on top in the first half, but Unión upped their game in the second period and started to look more likely to get back on terms.

However, Unión were indebted to keeper Diego Sánchez in the 82nd minute for  blocking Nicolás Blandi´s close-range header. And they made the most of their reprieve to grab the equaliser the following minute.

Set up by substitute Sebastián Jaime, ex-Universidad de Chile striker Canales showed his goalscoring instincts to finish things off and make it 1-1.

Despite picking up a useful away point, Unión are bottom of their group with three points from three games. They´ve yet to win, but they´ve yet to lose either.

Perhaps the picture will become a little clearer when Unión host San Lorenzo next Thursday (10pm).

Striker Canales, who scored twice against Audax Italiano in the Clausura last week, said: “We played with personality and now we have to win at home – that is what counts.”

Meanwhile, O´Higgins will try to continue their excellent start to their Libertadores campaign when they host Paraguay´s Cerro Porteño tonight (9.15pm). The match takes place at Colo Colo´s estadio Monumental.

It´s been a good week for the Chilean clubs so far. As well as Unión´s point in Argentina, Universidad de Chile won 2-1 against Real Garcilaso in Peru on Tuesday night.