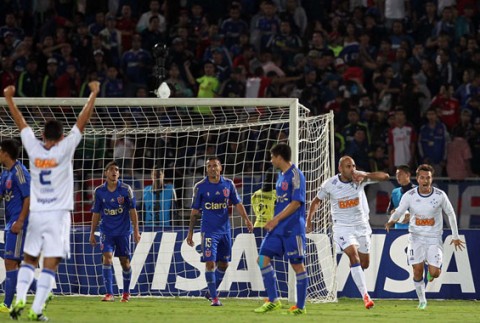 Cruzeiro defeat puts la U on the back foot

Universidad de Chile will almost certainly have to win in Uruguay next week if they´re to reach the last 16 of the Copa Libertadores.

Ñuñoa – That is the stark reality for la U after they let slip the chance to book their place last night.

Cristián Romero´s troops only needed a draw against Cruzeiro at the Estadio Nacional, but they succumbed to a 2-0 defeat.

Second-placed la U have nine points, while third-placed Cruzeiro are on seven. Real Garcilaso are out of the running with just three points.

Cruzeiro will be hot favourites to gain revenge at home against Garcilaso next Wednesday and that would put them on 10 points.

If that happens, then even a point for la U in their final game in Uruguay won´t be enough. Their goal difference, currently -3, would see them knocked out, with Defensor and Cruzeiro progressing.

Universidad de Chile´s negative goal difference has been due to their two defeats against the Brazilians. They were thrashed 5-1 in Brazil, but had the chance to make amends last night.

However, Bruno Rodrigo headed home a free-kick to give the visitors the lead in the 16th minute and Miguel Samudio gave them breathing space with the second five minutes before the break.

La U attempted to get back into the match in the second half, but couldn´t break down the visiting defence. In the closing stages, Universidad de Chile defender Matías Caruzzo and Cruzeiro´s Samudio were both sent off for two bookable offences.

Honest la U boss Romero said: “We weren´t at our best, we played badly and we let the opportunity slip away. Now we have to go to win in Uruguay.”