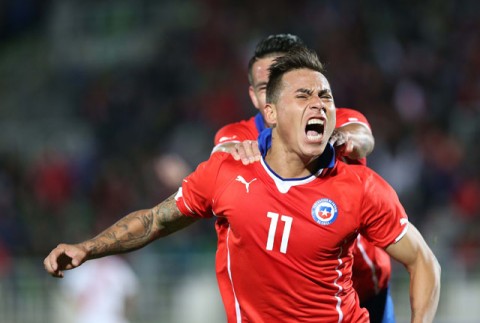 QPR striker Eduardo Vargas struck twice and Inter Milan´s Gary Medel bagged the other as Chile brushed aside neighbours Peru 3-0 in the ´Clásico del Pacífico´.
After a couple of mediocre performances against Mexico (0-0) and Haiti (1-0) in the United States, the onus was on la Roja to turn in an improved performance against the Peruvians on home soil.
And with Arsenal´s Alexis Sánchez in sparkling form, Chile did just that. However, it could have been different if Peru´s Paolo Guerrero hadn´t wasted a 22nd-minute penalty.
Jorge Sampaoli´s men made the most of that reprieve. Six minutes later, Vargas netted his first after being set up by Sánchez.
The match was well and truly in Chile´s grip when former Cardiff midfielder Medel headed home a Charles Aránguiz free-kick.
If that was the high point of Medel´s night, it soon turned decidedly sour. The Inter Milan man received an elbow in the face from Peru´s Rinaldo Cruzado, who was sent off, in the 40th minute.
The Pitbull´s bite will be a bit weaker as a result – he lost one tooth, while another was loosened.
With a man advantage, Chile had the opportunity to search for goals. However, they had to settle for just one more.
In the 54th-minute, Vargas scored his second of the night after connecting with QPR team-mate Mauricio Isla´s cross.
On a night when Barcelona keeper Claudio Bravo broke Chile´s appearance record by earning his 85th cap and Sánchez showed off some party pieces, la Roja eased to a comfortable victory.
Boss Sampaoli said: “Alexis creates a lot of chances with his movement. He´s a striker that can drop off and set up goals.”
With the Copa America on home soil next year, Sampaoli wants Chile to develop a more ruthless touch in front of goal.
He added: “The team improved with respect to the previous FIFA date and that generated the result in our favour.
“Beyond the fact that we dominated the game, we have to improve the way we finish our chances because we could have achieved a bigger scoreline.”
Chile will be back in action in another ‘friendly’ on Tuesday night – against Bolivia in Coquimbo.