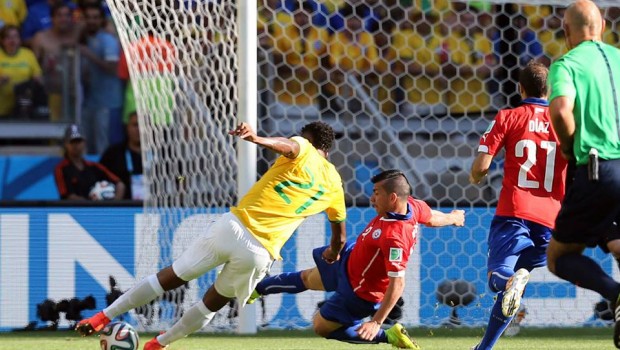 Chile took the game to Brazil, but their worst enemy was the framework of the goal. La Roja can be proud of their campaign, but will back their bags and leave the World Cup.

When the World Cup draw was announced, Chilean fans were pessimistic. Not due to playing 2010 finalists Spain and The Netherlands in the group stage, but because a likely scenario would seem La Roja up against hosts Brazil.

Just like 1998 in France and 2010 in South Africa, Brazil have bundled Chile out of the tournament. This time was different though. Unlike the 4-1 and 3-0 losses, Chile held their own and had momentum going their way for much of the game.

The opening encounter of the round of 16 had all the drama possible, with Brazil opening the scoring all too easily from a set piece. While the officials credit David Luiz for the first goal, the ball looked to have deflected off the outside of Gonzalo Jara’s boot and into his own goal.

Chile’s attacking forces joined up when Eduardo Vargas picked up a loose throw in, passing to an opening Alexis Sánchez who had no trouble in finding the equaliser.

While many attempts were made to trouble the scorers, both teams remained level until the end of extra time. The biggest chances were a ball that went in the goal for Brazil, but was ruled to have been handballed by Hulk. Following the ruling, the strongman got angry and created havoc through the Chilean defensive line, but couldn’t crack the defenses.

Claudio Bravo was outstanding at the back, with the new Barcelona signing making some huge saves to rescue Chile time and time again. Had Chile passed through to the quarter finals, the captain would become Chile’s equal most capped player.

Chile’s biggest chance came right at the end of the second period of extra time, when Mauricio Pinilla blasted the ball into the crossbar. It was to be the framework of the goal that would come to Brazil’s rescue at the end of the match. Earlier Charles Aránguiz made Julio Cesar prove himself with a rocket fired toward goal.

With 120 minutes played and no winner declared, the teams lined up for the penalty shootout. Luiz opened the account for Brazil, and Pinilla’s poor attempt put Chile on the backfoot. Sánchez also had his shot saved, which followed a complete miss by Willian for the hosts.

Marcelo put Brazil up 2-0 in the shootout, but Aránguiz, who has been one of Chile’s best in the tournament, showed calm, popping the ball over the goalkeeper’s head in a relaxed fashion. Hulk got angry again when Bravo blocked his shot, with another former Universidad de Chile man, Marcelo Díaz, evening up the scores for 2-2.

With the fifth shot, Brazil presented Neymar, one of the most valuable players in the world, who put his shot in after a jinking runup. For Chile, Gonzalo Jara was the man. The Nottingham Forest defender is not known for his goalscoring ability, having scored four goals at in a long club career, as well as 3 for the national team.

With the pressure on and a goal necessary to continue the shootout, Jara blasted the ball into the inside corner of the post, only for it to bounce back onto the field of play.

The miss meant Brazil were through to the quarter finals, and Chile eliminated. The hosts charged on to the field, while this time La Roja were left dejected, but proud of their efforts.

One that left everything on the pitch was Gary Medel, who came into the game under an injury cloud and cried when he had to be stretchered off, having given everything to the match.

One player that took no part in the game was Jorge Valdivia. Many were left wondering about Sampaoli’s substitutions when he brought on Felipe Gutiérrez for Eduardo Vargas. It was believed that Valdivia’s magic touch could have created some further opportunities for Chile.

Brazil will go on to play Colombia, who beat Uruguay to set up their first ever appearance in the quarter finals.

La Roja will now look to the Copa América, which Chile will host in 2015. Having never won the cup, this generation of players is the best chance Chile have to rise above their South American rivals.

Chile’s heroic efforts in the cup will not be forgotten, with Sampaoli having arrived at the job with Chile on the precipice of not qualifying, to take La Roja to the quarter finals and give the 5 time champions a great fright.