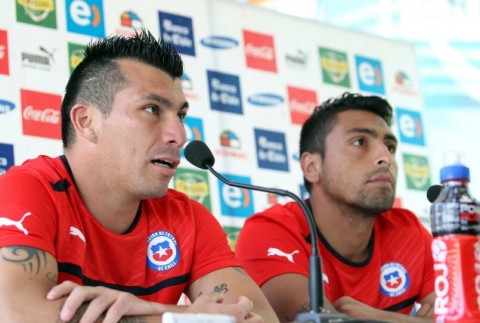 Chile has named 19 foreign based players for the clash with Germany in Stuttgart on March 5.

Jorge Sampaoli has entered his list of players for the clash with Germany. The Stuttgart match will be a true test too check Chile’s credentials for Brazil. Among those with a late chance to impress are attackers Mauricio Pinilla and Fabian Orellana. The Cagliari man has only played 63 minutes over three games during the World Cup qualifying process, while Orellana, whose famous goal against Argentina on the road to 2010 is still remembered, has all but disappeared from the selection process.

Despite being out injured, Cardiff City pitbull Gary Medel has been included in the squad, while Carlos Muñoz and Miiko Albornoz, who were the foreign based players brought in for the friendly against Costa Rica, have not been included. Sampaoli will name the remaining domestic players closer to the date. Among those suggested for a return to the squad are Colo Colo veteran Jaime Valdes.

Sampaoli’s squad should not have too much trouble adjusting to Brazil once the World Cup begins, with four players current active (Marcos González, Eugenio Mena, Charles Aránguiz and Jorge Valdivia) and Eduardo Vargas recently returned from a spell in Brazil.

The Germany match will give the Argentinian coach to test his strength against top quality opposition. It will also mark the opening of a month long celebration of sport, with Chile to host the South American Games days afterwards.