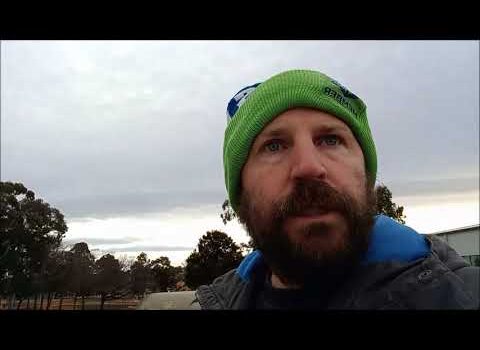 Capital Eyes. Vlog 91. I recently took a trip to Sydney to pick my Dad up from the airport. Along the way I made various stops.

Sydney is a few hours drive from Canberra. It’s an easy run up the Hume. On this particular day, I decided to take the long way round. I’ve been quite interested lately in our family history, so I wanted to explore areas like Kiama, Jamberoo and Kangaroo Valley. Added to a surf in Wollongong, I ended up travelling most of the day to make that short journey to Sydney. I have done plenty of previous vlogs of trips to Sydney. This one is Vlog 91.

I was up early and was able to catch a little of the sunrise over Lake George. I think if I had have left slightly earlier, it would have been even better. I packed my skates, and stopped off at the Goulburn skatepark.

I then stopped by the Goulburn cemetery, the first of a few for the day. This one, I was just wandering around with no plan, so didn’t really come across anything of interest. The next stop was a small town called Towrang. One of the ancestors on my Grandpa’s side, Spence Rofe died there, being run over by his own cart. You can find the newspaper article from 1859 here. There is not much happening in the town these days. Nearby you can see the Towrang Stockade.

I continued on my way, stopping by Sutton Forest, before taking a walk at Fitzroy Falls.

The water was really pouring over the falls. I hadn’t been there in a long while – it’s a really impressive view with the rocky walls running for a long way over the valley. Next it was down the hill with a stop by at the Pioneer Museum in Kangaroo Valley. I saw a few familiar family names and made a couple of connections that I didn’t know about. They also have a walk with a suspension bridge. The museum has a great collection of displays showing how things used to be, it’s worth a look if you are in the area.

Next stop was by the coastline, and for a change the Kiama Blowhole was actually blowing. On previous occasions I’ve taken visitors there only for there to be nothing happening. Next to that I visited the museum, though I found that was quite small.

The remainder of the trip will be contained in the following vlog. This is Vlog 91, that will be number 92. With a couple more in the works I am closing in on the century mark.