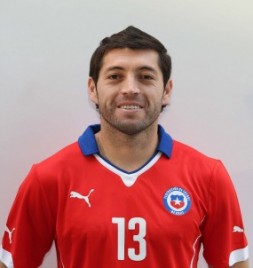 Universidad de Chile captain José Rojas will remain with the azules, with another chance at playing outside Chile falling apart.

Rojas was absent as the azules opened their season with a 3-1 victory over Cobresal, but the experienced captain will continue his career with Universidad de Chile.

After medical test prevented the completion of his move to Botafogo after leading “La U” to a Copa Sudamericana victory, the club later denied an offer for their captain from Corinthians.

The deal with Al Fujairah was reported to be worth $600,000, however a lack of paperwork meant that the deal was unable to go through and Rojas will stay to lead Martin Lasarte’s team.

It was the same club that Jorge Valdivia has recently joined. “El Mago” was sold from Palmeiras to the Arab team for his second stint in the United Arab Emirates, having gone to Al Ain on a big money deal between 2008 and 2010.

While some say that the Arab leagues are a backwater for international selection, that will not be on Valdivia’s mind. The Venezuelan born midfield magician, who scored against Australia in the World Cup, has retired from international duty.

One Response to No Arab Adventure for José Rojas