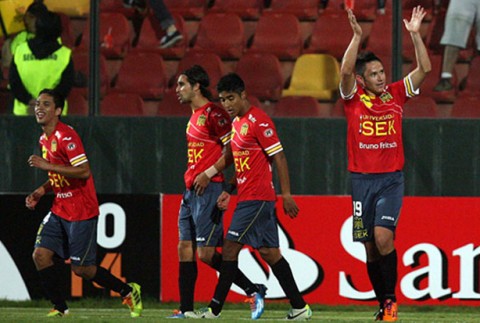 Independencia – Canales bagged Unión´s late equaliser against the team supported by the Pope in Buenos Aires last week. And he proved to be the scourge of the Argentinians for the second week running when he headed home in the 66th minute from a Cristián Chávez cross.

Union had created the better chances in the first half, but hadn´t been able to get the better of visiting keeper Sebastián Torrico, who pulled off fine saves to deny Nicolás Berardo and the influential Chávez.

The home side´s chances of earning a crucial three points were aided when San Lorenzo´s Mauro Cetto was sent off in the 52nd minute for a foul on Matías Campos Toro. And it was ex-Universidad de Chile striker Canales who made the visitors pay.

Before the match, José Luis Sierra´s men had been bottom of Group 2, but the picture looks a lot brighter now. The rojos are up to second place with two matches to play and have a good chance of qualifying for the knockout stages.

Unión´s next match in the competition (April 2) is at Brazilian side Botafogo, who top the group with 7 points after their 1-0 win against Ecuador´s Independiente del Valle. Unión have six points, while Independiente and San Lorenzo have four with two matches left to play.

Midfielder Chávez said: “It was a very hard game, but we´re happy with the result. The games in the Libertadores are like that and now we need to seek a good result in Brazil.”

However, the picture isn´t looking so rosy for current Chilean champions O´Higgins. They lost 2-1 against Cerro Porteño in Paraguay last night and have slipped to third place in Group 3.

The damage was done in the opening eight minute. Dani Guiza gave the Paraguayans the lead in the second minute and Julio Dos Santos added the second from the penalty spot on eight minutes.

Pablo Calandria gave O´Higgins hope when he pulled one back, also from the spot, two minutes later, but the Rancagua outfit couldn´t get back on terms and lost their unbeaten record.

O´Higgins face a testing week. They are away to leaders Colo Colo in the Clausura on Sunday and then face a crucial Copa Libertadores match in Colombia against Deportivo Cali on Wednesday.

Chile´s other Copa Libertadores representatives, Universidad de Chile, have a two-point lead at the top of Group 5. It follows a 2-2 draw between Cruzeiro (Brazil) and Defensor Sporting (Uruguay) last night.

It means that a draw against the third-placed Brazilians at the Estadio Nacional in their next outing on April 3 would be enough for la U to book their place in the last 16.