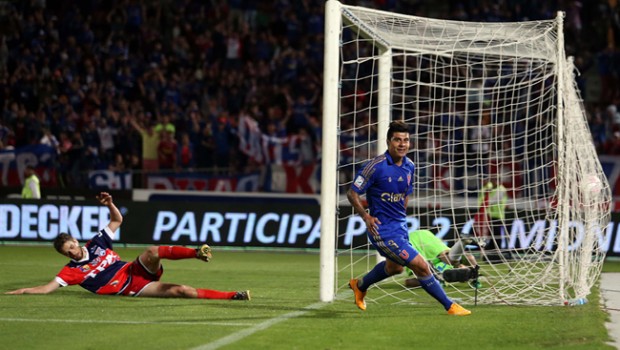 Pato Rubio struck two second half goals as Universidad de Chile ensured a five-point advantage at the Apertura summit ahead of the October 19 super clásico against Colo Colo.
La U weren´t at their best against San Marcos de Arica and could easily have fallen behind in the first half.
However, they stepped up a gear in the second period and Rubio set them on their way to victory in the 53rd minute with a superb side-footed volley from substitute Gustavo Lorenzetti´s inch-perfect cross.
After San Marcos keeper Pedro Carrizo was sent off for dissent in the 73rd minute, la U´s job became easier. However, the usually reliable Gustavo Canales chipped an 85th minute penalty over the crossbar when he could have sealed victory.
It wasn´t to matter, though, as Rubio tapped home at the far post in stoppage time to seal the victory and leave the azules sitting pretty ahead of their visit to Colo Colo after the international break.
Earlier in the day, Colo Colo finally got the better of bogey team Universidad de Concepción. After eight games without a win against the campanil, Esteban Paredes struck the crucial goal in the 67th minute from a marginally offside position.
Meanwhile, Chile´s other ´grande´, Universidad Católica, slumped to a 3-0 defeat at home against Huachipato, who moved into fourth. Ángelo Sagal, Omar Merlo and Andrés Vilches bagged the goals for the acereros, while Católica were left lamenting some crucial decisions that went against them.
O´Higgins also felt hard done by after falling at home against Palestino 1-0. Leonardo Valencia´s exquisite free-kick on the stroke of half-time won it for the visitors, who lie sixth.
Nicolás Maturana struck twice, one a beauty into the top corner, as Barnechea pulled off an excellent 2-1 win at Cobreloa, who have sunk to the bottom of the table.
Audax Italiano edged out Iquique 2-1 thanks to a late winner from Bryan Carrasco, while Jean Paul Pineda and Leandro Benegas were on target for Unión La Calera in their 2-1 home win against struggling Cobresal.
Antofagasta climbed off the foot of the table with a solid 2-0 home win against Ñublense. Gerson Martínez and Javier Elizondo bagged the goals.
Third-placed Santiago Wanderers host Unión Española, in fifth, next Sunday.