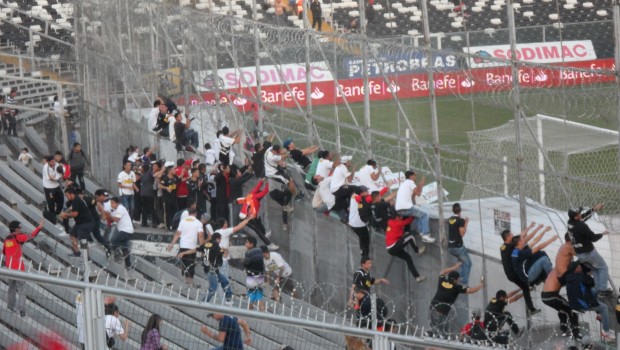 The Apertura is coming to a close with Universidad de Chile, Colo Colo and Santiago Wanderers in a three horse race for the title.

While Universidad de Chile captain José Rojas has stated “La U” will only focus on themselves, it would be hard not to take interest in the score between Santiago Wanderers and Colo Colo. The captain added that, “More than a match, it will be a war against La Calera.”

After leading the tournament from the beginning, a loss to their cross town rivals Colo Colo and a draw with recently promoted Barnechea have seen “La U” drop to second, though equal on points with Colo Colo. A win for both teams would set up a superclásico to define the Apertura champion.

Universidad de Chile were the losers in that previous war, with experienced defenders Rojas and Osvaldo González both given an early shower, while Esteban Paredes and Jean Beausejour scored for the home team.

If both teams finish level, a match will be played to define the title, while a clear winner will lift the trophy immediately. Both games will be played at 5 p.m. on Saturday.

Santiago Wanderers have been the surprise packet of the season, with former Palestino boss Emilio Astorga getting the most out of a reasonably low-profile team. The Valparaíso outfit lay only one point between the two biggest clubs in Chile, but fell to both of them during the season. Roberto Gutiérrez and Jorge Luna have been keys for the porteños, with 19 goals between them.

Unión La Calera hope to play on the nerves of Universidad de Chile, with the cementeros still in with a chance of qualifying for the liguilla to reach the Copa Libertadores.

Palestino, currently in fourth place, have a guaranteed place in the post-season, while Universidad de Chile or Santiago Wanderers could find themselves in the liguilla depending on their results. O’Higgins, Huachipato, Unión La Calera and Unión Española are all in with a shot of reaching international competition, while Audax Italiano and Barnechea remain a mathematical chance, but their participation is highly unlikely.

Colo Colo will look to reflect the work of their junior team, who beat Universidad de Chile on penalties to take the title in the under 19 tournament.