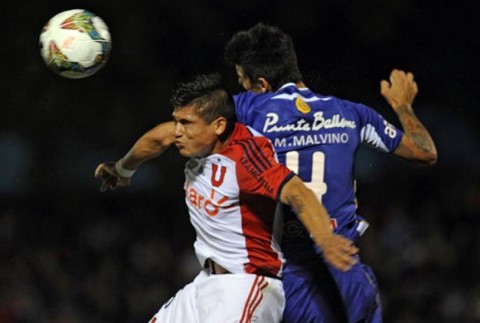 Uruguay – La U knew that they would almost certainly have to win to advance to the last 16 of South America’s top club competition.

They came into the game on the back of disappointing home defeats against Cruzeiro in the Libertadores and Colo Colo in the Clausura, but it looked as though they could put that misery behind them when Ramon Fernández struck in the 39th minute.

The Argentinian had been sent off against Colo Colo – and pushed the ref after his dismissal – so he had a point to prove last night. He fired home a powerful shot from just outside the area to give the visitors the lead.

La U needed to preserve their advantage, but their fragility was exposed in the second half as Matías Alonso levelled things up in the 57th minute.

Despite making changes, Universidad de Chile couldn´t find the winning goal they craved. To add insult to injury, substitute Luciano Civelli, who had only come on in the 90th minute, was sent off for pushing over a member of Defensor´s staff who had stopped him from quickly getting the ball back into play.

Defensor Sporting topped the group with 11 points, while Brazil´s Cruzeiro took the second qualifying spot after beating Peru´s Real Garcilaso 3-0 at home. Cruzeiro and la U both finished on 10 points, but the Brazilians had the better goal difference (+6 to -3). Real Garcilaso only picked up three points.

Universidad de Chile manager Cristián Romero said: “It that pains me is to get knocked out with ten points.”

After the midweek exits of O´Higgins and la U, it means that Unión Española will fly the Chilean flag in the knockout stages. The rojos slipped to an astonishing 5-4 home defeat against Ecuador´s Independiente del Valle last night, but had already qualified for the last 16.