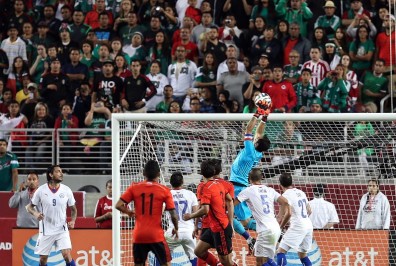 Goalkeeper Claudio Bravo celebrated becoming Chile´s joint-leading appearance record holder with a clean sheet in his side´s tame 0-0 draw against Mexico in San Francisco.
In la Roja´s first outing since their heartbreaking World Cup exit on penalties against hosts Brazil, Barcelona´s Bravo levelled with Leonel Sánchez on 84 caps for his country.
The former Colo Colo and Real Sociedad keeper had a quiet first half, but was called into action more as Mexico took a grip of the game in the second half. Bravo made a couple of useful interventions and was also thankful that Mexico´s shooting was wayward.
“The record is very important,” said a proud Bravo. “When you start playing, you never imagine that you will play so much.
“Mexico were a hard rival, they´re similar to us in terms of movement and quality.”
Chile tried to play their pressing game and could have taken a first half lead. Alexis Sánchez, playing a lone role up front, shot narrowly wide, while Juventus midfielder Arturo Vidal had a header superbly palmed over the crossbar by Mexico keeper Guillermo Ochoa.
However, Jorge Sampaoli´s men lost their way in the second half and were hanging on for a draw at the end.
There were encouraging displays from the likes of defender Gary Medel and right wing-back Mauricio Isla, while an all-action Vidal showed he is getting back to his best after all his much-talked about knee problems.
Next up for Chile is a clash against Haiti in Fort Lauderdale on Tuesday night. Sampaoli is expected to field a much-changed side against weaker opposition and this will give some of his fringe players a chance to show what they can do.