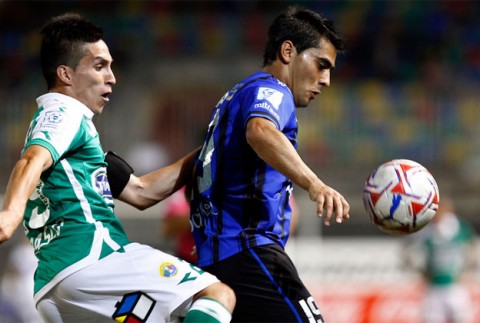 Huachipato and Audax Italiano will face off in a key battle to avoid relegation which opens the twelfth round.

While Rangers, currently last on the annual table, have gone into camp for the rest of the season, Huachipato have also tried something different. Players from the Talcahuano outfit were seen training in the park on the corner of Americo Vespucio and Vitacura ahead of the key match.

Huachipato, now under the guidance of former Chile under 20 coach Mario Salas, have accumulated 26, one win ahead of Rangers, while Unión La Calera and Audax Italiano are equal with one more competition point apiece.

The match will kick off at 8pm at Estadio Bicentenario in La Florida. Key clashes this weekend include the clasico universitario, with Universidad Católica hosting Universidad de Chile at the early timeslot of 11:30 in the morning on Sunday. Colo Colo will look to keep their position at the top against reigning champions O’Higgins. Tickets have been selling fast for the Estadio Monumental clash, which will take place on Sunday at 7:30pm.

Iquique and Everton will close out the round at 10pm on Sunday. Other matchups include Universidad de Concepción hosting Santiago Wanderers at Estadio CAP (12:30) and Antofagasta vs Palestino (8:30pm) on Saturday, while a packed Sunday schedule also sees Cobresal host Ñublense and Unión Española looking to back up their international form against Rangers. Both matches kick off at 4pm. Unión La Calera play host to Cobreloa from 5.

Colo Colo (29) are currently 4 points clear from Universidad Católica at the top of the table, while O’Higgins are in third (22). Palestino follow  with 20 points. Iquique and Universidad de Chile take the following places. With no playoffs, potential for the title is falling away for those not already in the lead.

In the lower divisions, Puerto Montt will face Iberia in a match that could decide who will play in the Primera B next season. San Luis are outright leads of the Primera B after a high scoring draw against Magallanes. The teams shared the spoils with four goals apiece.