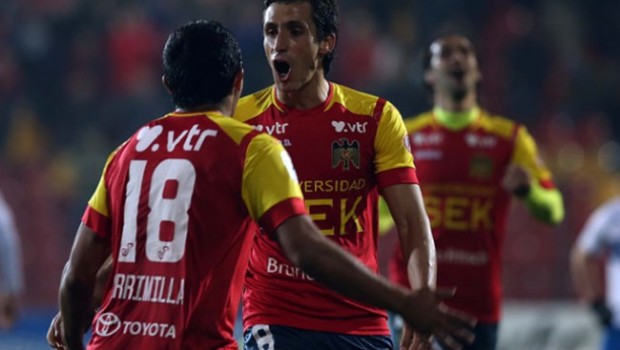 Universidad de Chile, Santiago Wanderers, Huachipato and Unión Española lead the way in the Primera División Apertura after two rounds of fixtures.
All four have won their opening two games, while champions Colo Colo lie fifth with four points.
Martín Lasarte´s Universidad de Chile top the pile after earning an impressive 3-1 victory at O´Higgins on Saturday.
Playing at the refurbished El Teniente, it was experienced striker Gustavo Canales who took the bulk of the plaudits with two goals, the second a cracking left foot volley. Attacking right-back Matías Corujo notched the other after a neat Canales lay-off.
It made it back-to-back 3-1 wins for la U after their victory by the same score against Cobresal last week, but Lasarte felt this one was much harder work.
He said: “At times you have to put on the black tie and at others the overalls. Today we had to put on the overalls.”
Santiago Wanderers have also made an impressive start under a new manager, ex-Palestino boss Emiliano Astorga. The Caturros pulled off an excellent 2-1 win at Cobreloa yesterday with goals from Matías Mier and Jorge Luna.
Huachipato made it two wins from two with a 1-0 victory at Universidad de Concepción, Andrés Vilches netting in the 74th minute.
Unión Española recorded their second 1-0 victory in dramatic style as Universidad Católica legend Milovan Mirosevic, surprisingly let go by the Cruzados at the end of last season, popped up with the winner in stoppage time to put one over his old club.
He said: “It´s a moment of great happiness because it was a week and a day very different for all that I lived in Católica. For those things of destiny, the ball came to me at the end and I could score.”
Unión boss José Luis Sierra said: “If someone had wanted to write that script, they wouldn´t have done it because no-one would have believed it.”
Colo Colo eased to a 2-0 success against Iquique in a match that saw Chilean international Jean Beausejour make his debut for the albos. He was upstaged, however, by Esteban Paredes who netted both goals.
The first came from the penalty spot in the 70th minute before he coolly tucked home the second six minutes later to take his tally for the season to three.
The other player with three goals to his name is Unión La Calera´s Leandro Benegas, who struck twice in his side´s comfortable 3-0 away win at Barnechea. He tapped home his first before unleashing a left-foot screamer for the second.
Jean Paul Pineda also netted to make it a miserable start for Barnechea´s 27-year-old boss Francisco Bozán.
Palestino won 1-0 at Cobresal thanks to a Leonardo Valencia last-minute goal, while Ñublense came from behind to beat San Marcos de Arica 2-1 with goals from Mathias Riquero and Sebastián Montecinos.
The weekend programme had got underway with a boring 0-0 draw between Antofagasta and Audax Italiano.