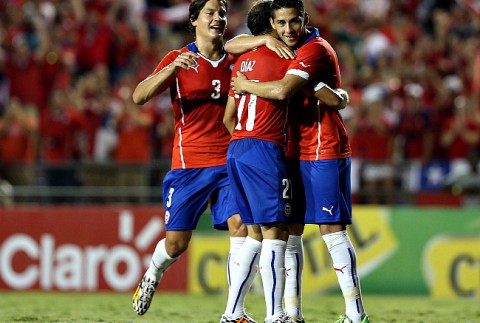 Colo Colo striker Juan Delgado capped his full debut for Chile with the only goal as la Roja edged out Haiti 1-0 in their friendly in Fort Lauderdale.
After last Saturday´s uninspiring 0-0 draw against Mexico, Chile were expected to brush aside lowly ranked Haiti with something to spare.
However, Jorge Sampaoli´s men didn´t hit top gear and it was only Delgado´s 19th-minute goal that separated the sides.
QPR´s Mauricio Isla, who had an excellent match, crossed the ball low into the box, the Haiti keeper could only push it away and Delgado was on hand to ram the loose ball low into the net.
The 21-year-old made his debut as a late sub against Mexico at the weekend, but this was his first start for his country.
Before the goal, Arsenal´s Alexis Sánchez and Internacional´s Charles Aránguiz both fired over from good positions. Afterwards, Chile couldn´t carve out the same kind of opportunities and a game, but limited, Haiti also had their moments.
The introduction of Colo Colo´s Jean Beausejour gave Chile extra attacking momentum in the closing 25 minutes, but they were unable to stretch their lead and that kept Haiti in with a chance until the death.
However, Sampaoli´s troops held on for a narrow victory at the Lockhart Stadium as the rain poured down in the closing minutes.
Skipper Gary Medel had a solid match in the heart of defence, while Isla impressed at right-back. But it wasn´t a convincing performance and Sampaoli could have got greater dividends if he had experimented more.