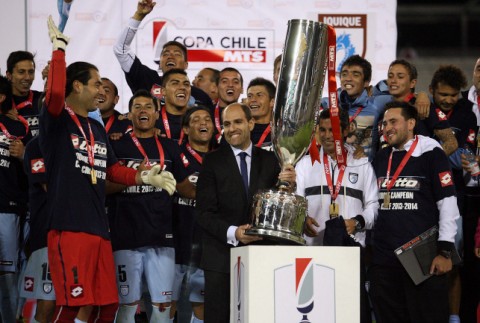 Deportes Iquique won the Copa Chile just a couple of weeks ago – but the new version of the competition is already just around the corner.

The draw for the group stages took place yesterday and the action gets underway on May 18 – in just under three weeks’ time.

Holders Iquique have been drawn in Group 3 along with Cobreloa, Antofagasta and San Marcos de Arica.

One of the most attractive groups is Group 1, which is made up of Universidad de Chile, Audax Italiano, Magallanes and Santiago Morning.

Meanwhile, Iberia, the Second Division champions, must wait to see which group they will play in. This depends on who is relegated from the Primera B.

The provisional groups that they could end up in are – Group 2: Cobresal, Coquimbo, Deportes Copiapó and La Serena, Group 6: Deportes Concepción, Deportes Temuco, Huachipato and Lota Schwager or Group 8: Universidad Católica, Ñublense, Curicó Unido and Naval.

Iberia will replace either La Serena, Lota Schwager or Naval.