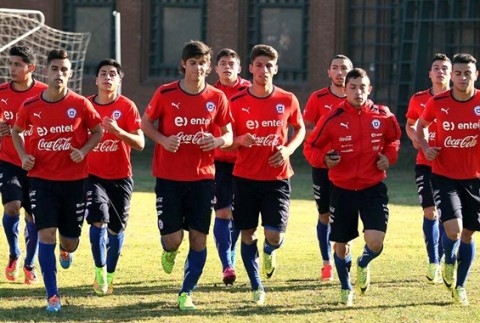 Chile Under-20s have the ideal opportunity to prepare for the bigger tests to come when they play a four-team invitational tournament in the United States next week.

La Roja are flying to the USA today for the competition at US Soccer’s National Training Center in Carson, California.

They have their opening challenge against the hosts on Monday at the Mooch Myernick Field. Chile then take on Australia, also at the Mooch Myernick, on Wednesday before rounding off the round-robin tournament against Bermuda at the StubHub Center on Friday.
Further down the line, Chile have the South American championships in mind and hope to qualify for the Under-20 World Cup in New Zealand next year.
Chile coach Claudio Vivas said: “This cuadrangular is very important and it’s important for us to have all our players available.

“It’s going to be good for us to play against the USA and Australia that are from different continents and are improving rapidly. We need to know what level we’re at.”

Universidad de Chile´s Cristián Cuevas said: “We´re preparing the base for the South American championships and this is a good group of players.
“We all want to reach the best level possible to qualify for the World Cup in New Zealand. I hope that that’s reflected in this tournament.”
Chile will be looking to the likes of Cuevas, Colo Colo’s Luis Pavéz and Universidad Católica’s Kevin Medel, brother of Gary, to impress in the USA.

One Response to Chile Under-20s aim to impress in California