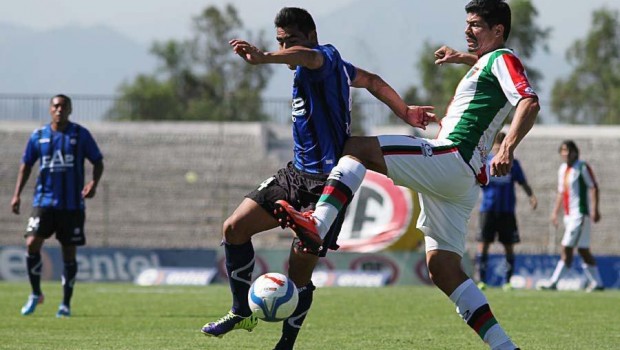 Surprise package Palestino moved second in the Clausura as Renato ´the shark´ Ramos sunk his teeth into relegation-haunted Huachipato.

La Cisterna – The árabes kicked off the tenth round of the Clausura knowing that a victory would lift them above Universidad Católica and O´Higgins in the table, at least temporarily.

Veteran striker Ramos headed Palestino into the lead at the start of the second half, but David Llanos pulled the visitors level in the 64th minute.

Huachipato´s hopes of earning a precious point away from home were denied when Ramos teed up César Valenzuela to net the winner three minutes later.

It means the árabes have an impressive record of six wins, two draws and two defeats from their opening ten games. They´re on 20 points, five behind leaders Colo Colo, who have a game in hand.

Birthday boy Luciano Vásquez was the man in the spotlight in Ñublense´s 1-1 draw at Santiago Wanderers, who were led by Héctor Robles following the departure of boss Ivo Basay.

It looked as though Vásquez would have a 29th birthday to remember for all the right reasons when he headed the visitors in front in the 13th minute. However, things quickly went downhill.

He missed a penalty four minutes later and was sent off at the start of the second half. His team couldn´t hold on as Marcos Sebastián Pol equalised for the hosts in the 72nd minute.

In the other Thursday match, Unión Española struck late on to beat nine-man Audax Italiano in a Santa Laura thriller.

Mora struck his second of the night to equalise in the 61st minute, but Audax´s hopes suffered a double blow with the dismissals of goalkeeper Jaime Bravo (71) and Cristián Oviedo (81).

The rojos piled forward against the nine-man visitors in the closing minutes and finally got their reward two minutes from time when Canales netted his second of the night to make it 3-2.

The victory was Unión´s first in five league outings and lifted them to seventh in the table.