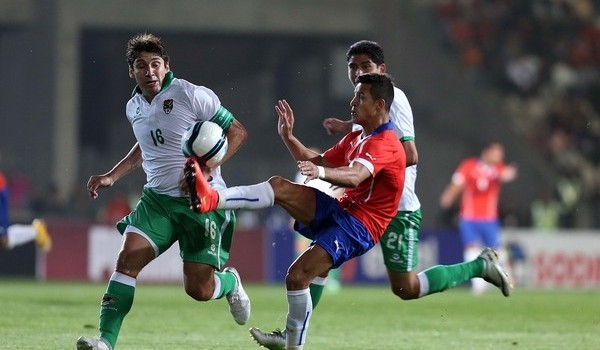 A highly-dubious stoppage time penalty, converted by Arturo Vidal, saved Chile from a shock defeat against Bolivia in Coquimbo.

After last Friday’s 3-0 victory against Peru in Valparaíso, la Roja were expected to notch up another comfortable friendly victory on home soil.

However, unfancied Bolivia took advantage of an uncharacteristically sloppy Chile performance to earn a draw. Indeed, they would have bagged a famous victory if it hadn´t been for the late spot-kick awarded by Argentinian referee Pablo Díaz after subsitute Pedro Pablo Hernández fell under the innocuous challenge of Bolivia’s Edward Zenteno.

A stunned Zenteno was sent off for his second yellow card, while his team-mates protested bitterly to the referee. When the complaints died down, Juventus midfielder Vidal kept his cool to fire home the penalty and make it 2-2.

Saucedo celebrated by pretending to swim on the Coquimbo turf – a clear reference to Bolivia’s century-plus demand for Chile to give them a sovereign exit to the sea.

Chile pressed forward in search of an equaliser, but couldn’t find their usual cohesion. However, they finally drew level in the 42nd minute. Eduardo Vargas’s shot was parried by Bolivia keeper Romel Quiñónez and Charles Aránguiz coolly tapped home.

The lively Alexis Sánchez was denied by a superb Quiñónez save and saw another effort cleared off the line as Chile attempted to go in front either side of the break.

But la Roja were undone once again in the 50th minute by a rapid Bolivian break. Chile’s defence was all over the place as the inspired Saucedo was given time and space to blast a powerful shot high into the net from the edge of the box.
Chile boss Jorge Sampaoli shuffled his pack to try to get back into the match, but a determined Bolivia held firm until the softest of penalty decisions ruined their night.

For Chile, it was a step back after two steps forward against Peru. La Roja never looked comfortable in defence, while the midfield couldn’t establish a permanent grip.

Arsenal striker Sánchez suggested afterwards that he´s forced to drop deep at times because he’s “desperate” to get on the ball and that la Roja miss the likes of creative players Jorge Valdivia, David Pizarro and Matías Fernández who can play a defence-splitting pass.
Against the Bolivians, Chile looked disorganised at times and it´s clear there is plenty of work to be done before next year´s Copa America on home soil.

As captain Medel admitted: “You can’t always play well and the first goal was my error because I didn´t see the striker.

“These games are useful to learn from the errors and play better in the future.”