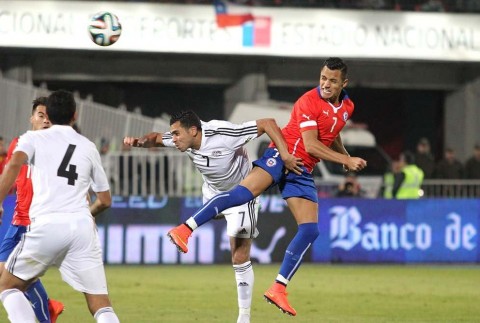 Alexis Sánchez continued his fine form for Arsenal with a quality finish in the exciting 2-2 draw against Manuel Pellegrini´s Manchester City.
Argentinian Sergio Aguero gave City the lead in the 28th minute, but Jack Wilshere levelled things up just after the hour before Sánchez´s golden moment.
The Chilean international striker struck a superb volley high into the net from ten yards to put the Gunners ahead with 16 minutes left.
However, Arsenal´s hopes of bagging all three points were dashed when another of City´s Argentinian contingent, Martin Demichelis, equalised in the 83rd minute.
Arsenal boss Arsene Wenger was delighted with the contribution of Sánchez, who made it three goals in his last three outings for the Gunners.
He said: “The goals were scored by two players that shone today – Alexis and Jack Wilshere. Sánchez was rewarded for his big performance today.”
In the Chilean stakes, Sánchez is now unbeaten in seven outings against Pellegrini, with five wins and two draws to his name for Barcelona and Arsenal.
Meanwhile, Pellegrini was more concerned with the performance of referee Mark Clattenburg after the Premier League clash at the Emirates Stadium.
The usually mild-mannered boss, who felt there were fouls in the build-up to both Arsenal goals, blasted: “We have very difficult decisions, today was unbelievable. Clattenburg had a very bad day today.”

One Response to Hot-shot Sánchez nets again for the Gunners