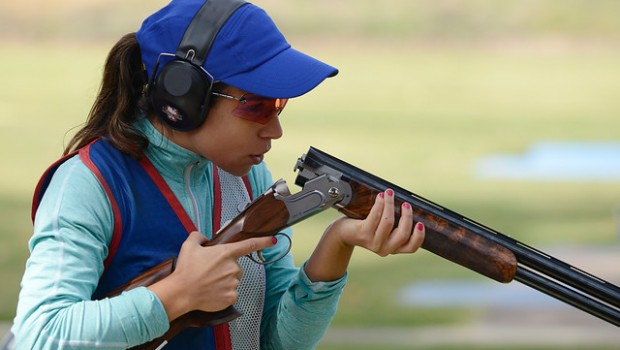 Team Chile captain Francisca Crovetto has urged the country’s sports stars to build on the interest generated by the nation’s footballers in the World Cup.
La Roja’s performances in Brazil captivated the country before they were knocked out on penalties by the hosts in the last 16.
While football tends to hog the headlines in Chile, the 24-year-old skeet shooter believes the country’s other sportsmen and women can now take advantage of the footballers’ success.
In an open letter, the South American Games silver medallist said: “I don’t want the public to think that only football can make them happy. We need to take the baton and continue to make all the Chileans happy.
“For that, I invite you to begin the ‘mode Team Chile’. The manner in which hundreds of sportsmen and women practise all the other sporting disciplines, that compete in big competitions and fight to put our flag at the forefront.
“For that, we make the effort every day. To showcase the colours of Chile, as did Alexis (Sánchez), Gary (Medel), Claudio (Bravo) and so many others during the World Cup.
“We have lots of good stories to tell. For example, Chile vibrated during the South American Games in Santiago. I had never seen venues full to see cyclists, athletes, gymnasts and many other sportsmen and women before. Believe me, with your support we´re going to stay filling them.
“Soon, more than 100 Chileans will represent us in the Panamerican Festival in Mexico, in August a delegation of 14 sportspeople leave for the Youth Olympic Games in Nanjing, in October comes the World Gymnastics in China.
“In addition, many compatriots are already preparing for two mega sporting events. The Panamerican Games in Toronto next year and the Olympic Games in Rio in 2016.
“The public need to see that we also feel pride when we wear our national shirt.”