They gave it their best shot, but Chile´s shooters found it tough going in the ISSF World Cup in Munich.

Crovetto has to settle for seventh 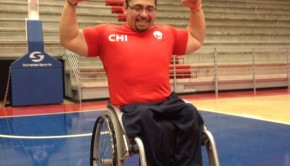