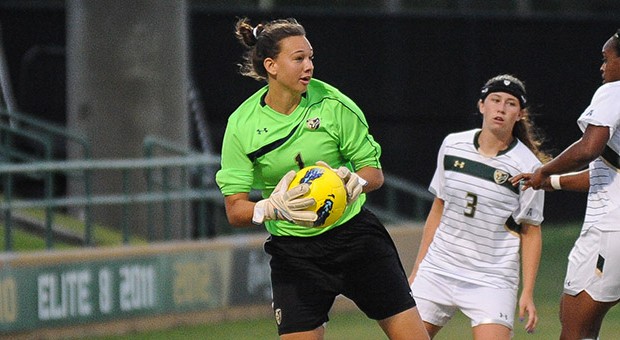 Chile’s goalkeeper Christiane Endler has been snapped up by Chelsea Ladies, becoming the first Chilean woman to be fully dedicated to being a professional football player.

Endler, who has been named as Chile’s best female footballer three times and won the Copa Libertadores with Colo Colo in 2012, will join the English club in May, part of a host of new signings by Chelsea.

To make the move, Endler will put her studies at the University of South Florida on hold, where she has been playing for the university team in the American Athletic Conference.

Her first season with the Bulls had Endler conceding less than a goal per game, one of the best records in the history of the club.

We are delighted to announce the signing of Chilean goalkeeper Christiane Endler. http://t.co/t4JUgyrm5k

The Chilean will fight for a place in the starting lineup with Marie Houlihan (UK) and Rebecca  Bull (USA). Chelsea’s ladies will be hoping to win the league title for the first time.

“Tiane” first appeared on the scene when Chile hosted the Women’s Under 20 World Cup in 2008, while she captained the team to silver at the South American Games. Starting her career at Unión La Calera, Endler also reach the Copa Libertadores final with Everton.

Despite all her experience, the 22 year old still has a long career ahead.

“Christiane Endler is one of the top young goalkeepers in international football and it’s a real coup for us to get her here at Chelsea,” said Chelsea manager Emma Hayes.

“She has a commanding presence and her all-round game is exceptional. She will provide competition with Marie and is the final piece in our group for this season.”

Also on the books at Chelsea is Chilean youngster Cristián Cuevas. He was signed after the Under 20 World Cup and is currently on loan with Dutch side FC Eindhoven.