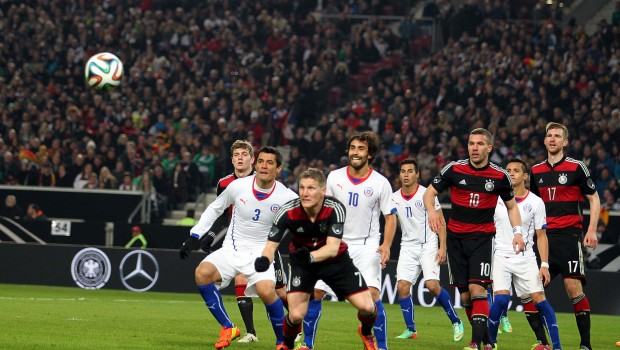 El Mercurio reports that supplier Puma has enraged Chile’s ANFP, with a mixup in equipment leaving Chile with Ghana’s shorts.

The report, which showed a picture of Ghana’s shorts mixed in with Chile’s, added that Puma had been late with the designs, as well as the fact that some of the players found their equipment uncomfortable after the new look’s debut in the 1-0 loss against Germany.

Puma are third when it comes to providing World Cups behind Nike and Adidas, with one quarter of the 32 teams using their outfits. In a Mashable article ranking the style of the kits of each team, Chile was in a lowly 25th position. Puma’s contract with Chile lasts until the end of the Copa América in 2015.

With Chile’s younger squad preparing for the Toulon tournament, the arrival of the Ghana outfit could spark memories of the devastating way which La Rojita was bundled out of the Under 20 World Cup in Turkey, with the Africans scoring a 121st minute goal to earn victory.

Some in the senior team will also recall the only clash between Chile and Ghana, played in the USA. Originally being scheduled for New York, the match was moved to Philadelphia, while Ghana’s team, up 1-0 at half time, refused to return to the field. The game, played in icy conditions, eventually resumed after over half and hour delay, with a late Matías Fernández penalty levelling the scores.