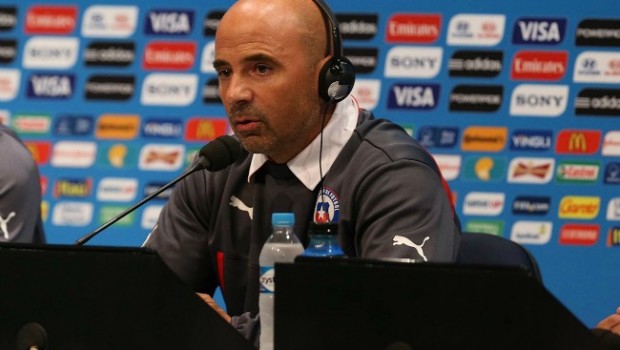 If ever there was a good time for Chile to break their duck against Spain, then surely this is it.
La Roja go into tomorrow’s vital Group B showdown against the world champions at Rio´s Maracaná in a positive frame of mind after last Friday’s 3-1 victory against Australia.
Spain, however, are reeling from their stunning 5-1 humiliation at the hands of Holland.
So after a measly return of two draws and eight defeats against Spain over the years, perhaps this is the golden opportunity to turn the tables.
However, Chile boss Jorge Sampaoli has admitted la Roja will need to up their game after the Socceroos posed them plenty of problems in the opener.
The former Universidad de Chile boss said: “If we don’t correct some things, it’s going to cost us when we confront teams with better quality.
“We have things to improve if we want to come through a group that has teams that are historically very strong.”
And Sampaoli has insisted that no one should write Spain off in the aftermath of their Holland nightmare.
He added: “Their quality is intact and Spain stay being a candidate to win the World Cup.
“It’s never a good moment to play against them, but we’ll try to play a good game and knock them out of the cup. That would be a plus for us.
“They’re playing a final to stay alive and we’re playing a final to qualify.”
Victory would ensure Chile a place in the last 16, while even a draw would leave them in a good position to qualify.
The indications in the build-up are that Sampaoli will bring Osasuna’s Francisco Silva into the side to play alongside Gary Medel and Gonzalo Jara in a back three. Jorge Valdivia, who scored against Australia, is the man tipped to make way.
The match kicks off at 3pm, Chilean time.