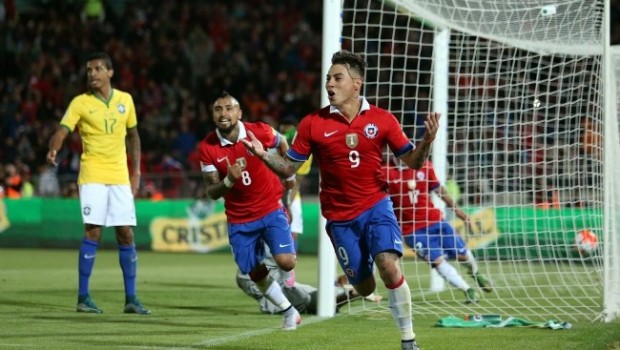 Chile have got their World Cup qualifying campaign off to a perfect start, defeating Brazil for the first time in 15 years.

Eduardo Vargas opened the scoring for Chile, managing to tap in a Matías Fernández free kick past some brittle goalkeeping work by Jefferson, while Alexis Sánchez sealed the deal late in the match after combining with Arturo Vidal.

Barcelona goalkeeper Claudio Bravo kept a clean sheet, with the Chilean captain not required to intervene in too many situations. Jorge Sampaoli would be extremely pleased with the opening to the campaign, with the Copa América champions getting off to a perfect start.

Neither side could capitalise on opportunities in the first half, but the introduction of Fernández and Mark González gave Chile some more equilibrium, eventually leading to Hoffenheim attacker Vargas opening the scoring, with Arsenal’s Sánchez finishing off the job.

The win was just the eighth for La Roja in matches against Brazil, with the last victory coming in 2000 and the previous during the 1993 Copa América. The teams have faced each other 71 times, with Brazil winning on 50 occasions. Chile fans would still be having the vibration of the crossbar ringing in their mind after the palo brought an end to World Cup hopes.

Brazil have missed superstar Neymar for heavy chunks of their recent disastrous campaigns. The Barcelona man remains suspended after his antics early in the Copa América.

While Chile’s position as Copa América champions means the victory over the five-time World Cup champions was not such as surprise, Ecuador stunned Argentina, also winning 2-0. The scoreline was the same when Uruguay achieved their first ever away win in Bolivia, while Colombia also beat Peru 2-0. Paraguay only managed one goal in their victory over Venezuela.

The next round will see Chile travel to Peru and hope to maintain the strong form and sense of teamwork that has brought them into the top 10 of the FIFA rankings.