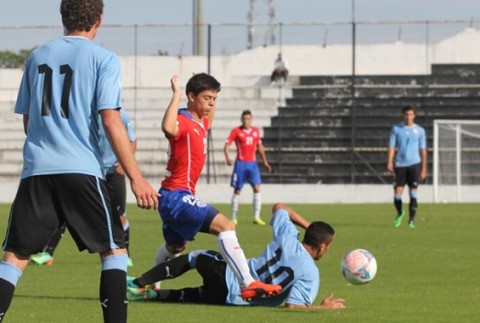 Chile´s Under-20s were denied victory by a last-gasp goal in their friendly against Uruguay.
Montevideo – La Rojita were determined to make amends for Tuesday´s 3-0 defeat against the same opposition in Punta del Este and looked as though they would gain revenge when they led 1-0 going into the last minute.
However, Enrique Etcheverry levelled for the hosts in the last seconds of the game to prevent Chile winning.
The visitors had taken the lead in the 22nd minute when Camilo Rodríguez headed home and it appeared they would run out victors at the Estadio Jardines del Hipódromo.
At least it was a marked improvement on Tuesday´s defeat when goals from Mauricio Lemos (21), Horacio Sequeira (78) and Franco Acosta (90, pen) sent Chile spinning to defeat.
La Rojita are preparing for the prestigious Esperanzas de Toulon tournament that takes place from May 21 until June 1. The team, coached by Claudio Vivas, return to training on Monday.