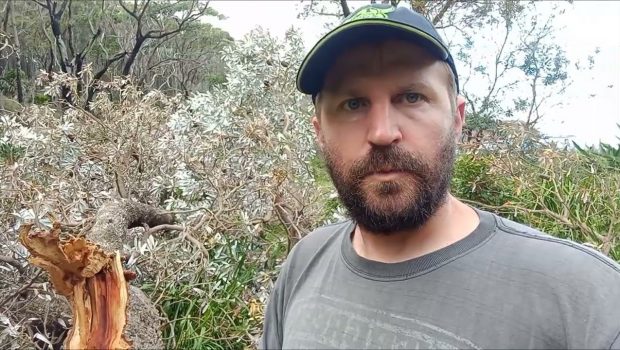 During a recent trip to Depot Beach, I made a trip up Durras Mountain, starting at Pebbly Beach.

Durras Mountain had been on my list for a little while, and to be honest I thought the climb would be easier. During this visit there had been a lot of rain beforehand, so there was mud everywhere making things a lot more challenging.

I have done the walk a few times, but not for a long while. I believe the last time was with Dad, we walked around the coast from Pretty Beach and then back over the top. The walk from Pebbly Beach takes you a long the coast to being with, which was making me wonder if I was on the right track. Eventually you have the option to continue along the coastline or to head uphill.

I wasn’t sure if I had enough time, but I made it up despite fallen trees and some slipping and sliding. Thankfully I didn’t fall right over at any point. Once you reach the top, you have a good view out to the western side, as well as back over the ocean.

I previously visited Pebbly Beach with a friend from Canada, I had guaranteed there would be kangaroos on the beach. This is a classic photo on the brochures but on that occasion, there were none there. I think the heat had them hiding away.

This time there were quite a few on the grass at the edge of the beach. Going up the hill you could see a lot more damage from the fires. It was interesting to find some places completely untouched and others severely damaged. Many of the signs to point the way didn’t survive.

The Durras Mountain walk can also be done from the Pretty Beach side. We also talked to some people who had done a ride through the back roads and fire trails to get from Depot Beach right up to Bawley Point. There is a lot of area to explore up in the area.