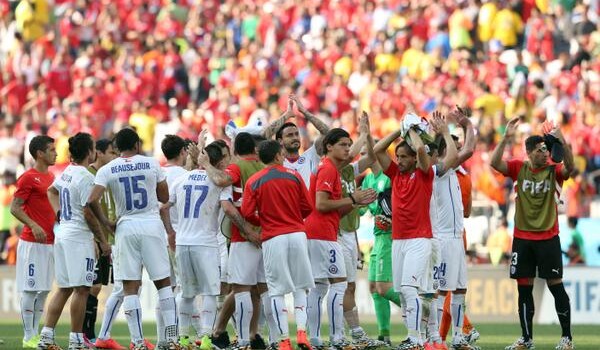 If all the players have the same belief as Alexis Sánchez, then maybe, just maybe, Chile can pull off one of the biggest shocks in World Cup history tomorrow.
Chile have been well beaten in their three previous World Cup meetings against Brazil and they´re taking on the five-time champions in their own backyard.
It´s difficult to imagine Brazil being knocked out in the last 16, but Barcelona striker Sánchez believes that la Roja now have the mindset to become winners and not merely the gallant losers.
He said: “We must have the mentality of Gary Medel, of Arturo Vidal. Arturo´s winning mentality has put him where he is today.
“I´m proud of Arturo and Gary – they are warriors on the pitch. We´re going to demonstrate that we can do big things, like we did against Spain.
“We´re in the World Cup to make history. We beat the world champions, we won the first game against Australia and we stumbled against Holland, but that has helped us to iron out the errors we made.
“We will try to win, to advance and to fulfil the dream of winning the World Cup. If I didn´t have that confidence, I´d go to my room, grab my things and go home.”
Last Monday´s 2-0 defeat against Holland was a stumble la Roja could have done without as it sent them into the tougher side of the draw – and up against Brazil.
The hosts won two and drew one of their three group games to qualify top ahead of Mexico on goal difference, but it doesn´t look like a vintage Brazil side by their high standards.
They´ve shown weaknesses in defence and that is something la Roja will try to exploit through the pace and finishing skills of Eduardo Vargas and Sánchez.
At the other end, Chile will have to try to stop four-goal Neymar, one of the top scorers in the tournament, if they want to progress.
Throughout the week, there have been differing reports on how Chile boss Jorge Sampaoli is going to line up his team tomorrow.
There have been suggestions he will switch to a back four, but playing Francisco Silva in a back three along with Medel and Gonzalo Jara would give Chile extra security and not allow the Brazilians the kind of space they love to exploit.
If Chile do go with a back three, then the onus will be on wing-backs Mauricio Isla and Eugenio Mena to get forward down the flanks. Midfielders Vidal, Charles Aránguiz and Marcelo Díaz will need to work overtime in the middle and try to create the openings for Vargas and Sánchez.
Brazil can often bring players off the bench to change the game if things aren´t going right, so Chile need to be prepared for that eventuality and Sampaoli needs to get his own substitutions right, especially if his troops are tiring in the latter stages.
Chile will also hope that English referee Howard Webb gets the critical calls right and isn´t influenced by the home crowd.
The match kicks off at noon tomorrow, Chilean time, in Belo Horizonte and promises to be a cracker. If they´re to have any chance, Chile need to get off to a good start and scoring the first goal would give them a massive confidence boost.