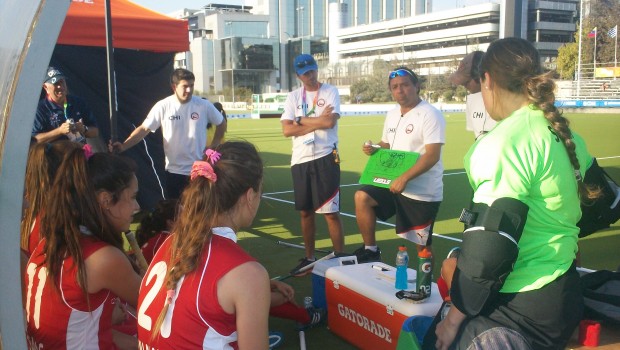 Chile coach Ronnie Stein saw his side thrash Venezuela 7-1 in the women´s hockey tournament at the South American Games and then insisted: “We need to improve our finishing.”

Vitacura – Las Diablas had already romped to 8-1 and 5-0 victories against Paraguay and Brazil respectively and another rout was always on the cards against the Venezuelans, who had lost 14-0 to Argentina and 6-0 to Uruguay.

But Stein was spot on because his side should have scored 17 – or more –  against Venezuela at Club Manquehue.

Seven was a miserly total from a match where they created a glut of chances. A combination of poor finishing and, to be fair, outstanding goalkeeping from Venezuela´s Eva Montes kept the score down.

The first half was the best example of Chile´s lack of precision in front of goal. A red army surged forward from the start and created chance after chance. However, Montes pulled off some world-class saves and even kept out a fifth-minute penalty from Camila Caram.

Agustina Venegas eventually made the breakthrough in the 17th minute and Sofia Filipek doubled the lead two minutes later when she tapped in at the far post.

However, Venezuela stunned the hosts when Yamileth Pargas pulled one back in the 23rd minute and that was the way it stayed until the break.

Chile eventually cut loose in the second half. In a devastating seven-minute spell, Las Diablas struck four times to kill off the contest. After goals from Josefa Villalabeitia and Caram, Filipek notched two more goals, the latter from the penalty spot, to complete her hat-trick.

Right at the death, striker Manuela Urroz scored to make it seven and give the home fans another goal to cheer. But with crucial games against Argentina (tomorrow) and Uruguay (Saturday) to come in the group stage, Stein wants Chile to be more ruthless in front of goal.

He said: “We tried to find good spaces in attack and we had lot of shots, but the truth is that we lacked the finishing touch.

“We need to improve because now we´re entering the competitive phase of the tournament. Argentina will be tough, but we´ll aim to play well and hopefully win.

“We know that Uruguay will be a difficult rival and they will try to hit us on the counter attack.”