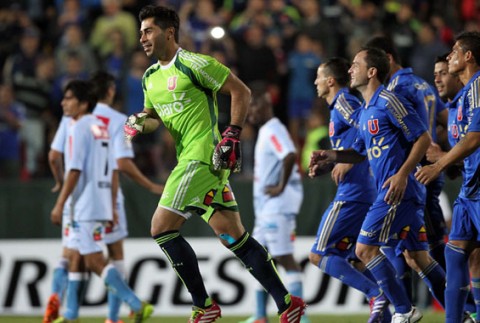 Universidad de Chile moved to the top of Group 5 in the Copa Libertadores thanks to a surprise source. Goalkeeper Johnny Herrera scored the only goal of the match from the penalty spot.

Universidad de Chile beat Peru’s Real Garcilaso 1-0 thanks to the Herrera penalty, with a few other key opportunities coming off the crossbar. “La U” now have 3 wins from four matches and will await the result between Defensor Sporting and Cruzeiro.

Despite a 5-1 thrashing at the hands of the Brazilians, the azules are now in the controlling seat, having beaten Real Garcilaso both home and away. Their two remaining games of the group stage will be Cruzeiro at home and the final match in Uruguay.

The crowd went wild when the goalkeeper blasted past his opposite number at Estadio Santa Laura. He became the first Chilean goalkeeper to score in the Copa Libertadores as well as the first goalkeeper for La U to score during a match (penalty shootouts not included). Herrera has scored penalties, including during La U’s visit to Japan for the Copa Suruga Bank against Kashimi Antlers and in the Copa Chile against Unión Española.

Nicolás Peric, currently at Rangers, was the first Chilean to score during the match in South American competition. Playing for Universidad de Concepción, he managed a length of the field goal in the 2004 Copa Sudamericana against Bolívar.

A win over Iquique on the domestic front has kept the azul hopes alive, but Universidad de Chile (sixth) remain 12 points behind leaders Colo Colo. The clasico universitario, to be played at 11:30 in the morning against second-placed Universidad Católica will be vital for the