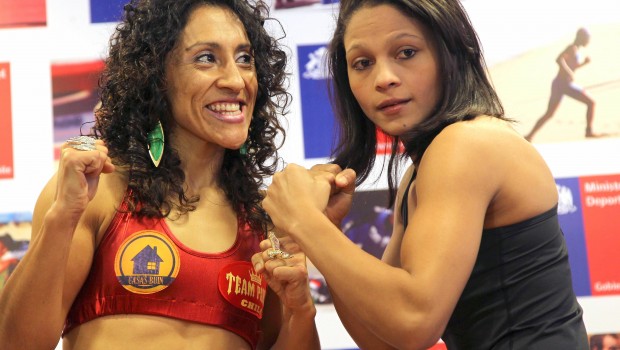 Chile’s Carolina “Crespita” Rodríguez will take on Colombia’s Dayana “Diamante” Cordero in a fight for the IBF female bantamweight title in Santiago.

It will be the Chilean boxer’s first title fight in the capital, having won and defended her title in the ring in Constitución. All is in order for the fight, which will play out in front of over 4,000 people in the polideportivo at Estadio Nacional.

At the official weight in, the title holder tipped the scales to 52 kg, while her 18-year-old opponent weighed in a kilogram heavier. Both fighters were under the 53.3 kg limit for the bantamweight division.

The event has received strong support from the government, with tickets being given away for free and an arrangement being made with TVN to broadcast the fight live.

The visiting Colombian will be looking to knock the hopes out of her undefeated host, having won 9 of her 13 victories by knockout. The Chilean has taken a more measured approach, with only one knockout to her name in her twelve victories.

The action will begin at 8:30 p.m. and show the beginning of the use of the newly built infrastructure that was a part of the South American Games. Chilean Olympic Committee boss Nevin Ilic has said that these facilities should be hosting more major events.