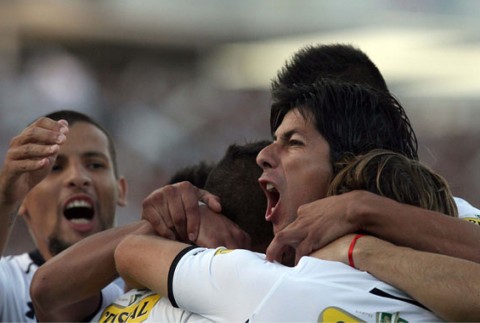 Colo Colo can take another big step to their much-coveted 30th league title when they meet Universidad de Concepción on Sunday night (6.30pm).

Macul – The albos have a seven-point lead at the top of the table following last week´s 3-0 home win against O´Higgins and second-placed Universidad Católica´s 3-0 home defeat against Universidad de Chile in the Clásico Universitario.

With just five games left to play, it seems only to be a case of ´when´ and not ´if´ Colo Colo win the league. However, their rivals will hope that Universidad de Concepción can end the albos´ unbeaten run.

U de Conce lie a comfortable eighth in the Clausura, but have faltered after a bright start to the season. They have, however, been a bogey team for Colo Colo in the last few years.

Of the last five meetings, U de Conce have won four and drew one. The last encounter saw the Campanil triumph 4-1 last November.

There will be a much smaller crowd than last week at the Monumental. There was a crowd of 41,000 for the O´Higgins match, which was temporarily suspended when flares and fireworks were set off by home fans in the second half.

The authorities have punished Colo Colo by reducing the capacity to 30,000 for Sunday´s match, a decision that hasn´t gone down well with the players.

Colo Colo striker Esteban Paredes said: “It´s lamentable that more than 10,000 of our fans have been punished for the actions of a few.”

At 1.30pm, Palestino have the chance to make amends for their 2-1 midweek home defeat against Unión Española when they host bottom of the table Rangers.

The visitors will be bossed by Jorge Garcés for the first time and he will need to perform instant miracles to keep the Talca outfit in the top flight. They are four points adrift at the bottom of the table and in a wretched run of form.

Universidad Católica will seek to keep their slim title hopes alive when they visit Cobreloa (3.30pm), while Santiago Wanderers and Unión Española bring the Saturday curtain down at 8.30pm.

On Sunday, there are three other matches aside from Colo Colo vs U de Conce. Ñublense host third-placed Iquique, relegation-haunted Huachipato entertain Antofagasta and O´Higgins play Cobresal. All three kick off at 4pm.

The round comes to a close on Monday night (8pm) with a vital game at the bottom of the table. Everton host Audax Italiano with both sides desperate for point to move away from the danger area.