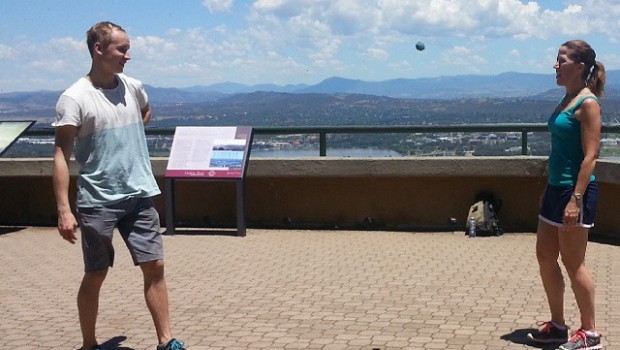 Some of Australia’s best footbag players will gather in the capital to decide the 2014 Australian champion.

Among the guests are Finnish footbag superstar Juho Marjo. Considered one of the most stylish players in the world, “Super” Marjo was third at the World Championships in 2006. He also took part in this year’s Sport/Life European Footbag Tour. The video “Joulu-Jupe 3.0” was one of the most popular footbag videos released in 2013.

Having arrived recently in Australia, he will join the likes of Andrew Grant, Ales Zelinka, Phil Morrison, Dylan Fry and many others as international guests as Australia’s most important freestyle footbag competition. The first Australian championships were held in 2001, with Canberra last hosting the event in 2008.

The ranks of Australian players have been bolstered with Caroline Birch and Daniel Boyle returning from overseas stints. During her time in Poland, aside from running the Happy Seven hostel and hosting the Dzem Jam, Caroline took out the women’s event at the Polish championships.

The events will take place at Hackett shops, with action beginning at 10 a.m. and the competitions beginning from 11:30 a.m. Events will include routines, shred 30, Sick 3, Sick 1, consecutive kicks and four square.

Boyle will be the only player to have been at the first national championships. As a teenage beginner, he took out the consecutive kicks tournament. He eventually went on to win routines in 2010 and shred 30 in 2011.

The year of events is coming to an end, with the Southern Hemisphere finishing things off. The weekend will also see the MedeJam happening in Colombia’s Medellín, with special guest Dexter Struz. The Czech veteran has plans to visit Australia in 2015.

The competitions will be a perfect start to training for the 2015 World Championships, which will take place in Copenhagen, Denmark in July 2015.