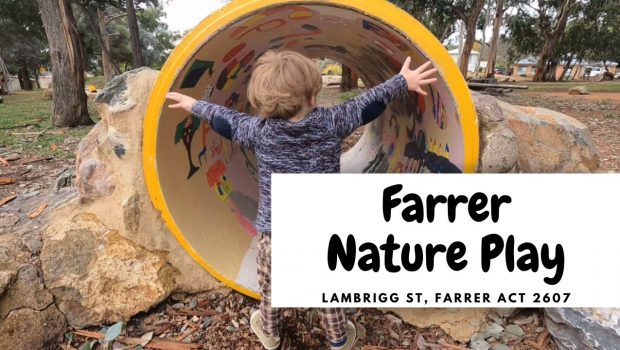 Farrer takes it name from the wheat farmer, William. His pioneering works near Tharwa have been remembered.

Farrer is named after William James Farrer, a wheat-breeding pioneer, whose many experiments were conducted at his property ‘Lambrigg’ near Tharwa. Streets are named after agriculturalists. 🦊 and Bow is one of the best cafes in Canberra and is in the suburb. #A2ZACT pic.twitter.com/H3H0WOnPmf

I know very little about Farrer the suburb, or the man it is named after. It may actually be one of the few suburbs I have not visited at all. In terms of nature, I know of the Farrer Ridge Nature Reserve and the walks within it, but that one is still on the to do list. The Fox & Bow is a popular southside cafe which is located in the suburb.

Some more recent additions to the suburb are the Nature Play park as well as the bike track surrounding it. The video below shows a “kid friendly” view of the trails linking Farrer and Fadden.

The Canberra Times featured 36 hours in Farrer, while the Feel the Power blog looks to have got a great springtime feel for the suburb, with some excellent photos in the piece. If you want to go back in time, you can see this photo displaying typical Farrer housing in 1969.

William Farrer’s work with wheat is celebrated. Much of his work was to do with developing wheat crops resistant to rust. He did much of his work at the Lambrigg property. This property was received as a wedding gift and was originally part of the Cuppacumbalong property. The work was continued after his time, and you can see more information on that here.

Farrer died in 1906, meaning he didn’t get to see too much of the results of his hard work. His efforts were celebrated on the Australian two dollar note when Australia moved to decimal currency. You can get one of these on Ebay for more than $2. There is a memorial to him on the site of the old homestead. It was erected by the federal government in 1939. He is also celebrated with a bust in Queanbeyan. The Farrer Football League in the Riverina also takes its name from this famous wheat man.