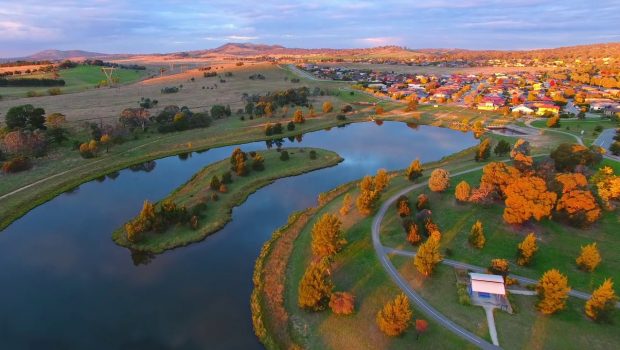 The suburb of Dunlop takes its name from “Weary” Dunlop, a key name in World War 2 history. Brent Ford runs us through.

Dunlop is named after Lieutenant Colonel Sir Ernest Edward “Weary” Dunlop, an Australian surgeon who was renowned for his leadership while being held prisoner of war by the Japanese during WW2. Streets in Dunlop are named after inventors, inventions and artists. #A2ZACT pic.twitter.com/Icq8MUSyM5

I believe Brent grew up in this area, so he should be taking us to the good spots. His run takes us from the centre of the suburb and out towards the West Belconnen Pond. The suburb itself is quite large, with a view into New South Wales from many parts. It is also bordered by the Dunlop Grasslands. You can see in this article the road being extended to access the new Belconnen suburb.

There are many walks around the suburb, with a number of small playgrounds scattered around the place. For a bit of a tour around you can follow this walk.

The Feel the Power blog made mention of the ponds. There are certainly a number of waterways in the area. You can follow the ponds and continue along until reaching Macgregor and beyond. You can see the ponds from above in this video.

If you look on Google Maps it seems there is a route into New South Wales through the Jarramlee Nature Reserve, though I have had a look and it seems to be private property. There is more information about walking the border at this link. You can see some of the bike tracks and back roads in this video.

The suburb takes its name from “Weary” Dunlop, whose efforts in the POW camps in the Thai-Burma Railway during the Second World War were quite significant. He is remembered in statue in Melbourne and in his home town of Benalla.