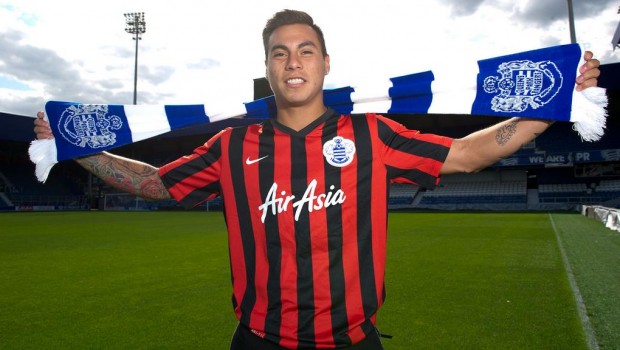 Speedy striker Eduardo Vargas has become the latest Chilean to move to the English Premier League by signing for Queens Park Rangers on a season-long loan.

Turboman will link up with his Chilean international team-mate Mauricio Isla at the west London club, who won promotion back to the top-flight in the play-offs at the end of last season.

Fellow forward Alexis Sánchez got the ball rolling by signing for Arsenal, while Manchester City boss Manuel Pellegrini, who won the Premier League last term, is the sole Chilean representative on the managerial front.

While Arsenal and Manchester City seek silverware this season, QPR´s main aim will be to stay in the moneybags Premier League – and that will be where Edu’s goals could be crucial.

There’s no doubt that Vargas, who hails from Renca, has the attributes to be a huge success in the Premier League – his blistering pace and finishing ability means he will pose plenty of problems for the very best defenders.

However, it will largely depend on whether experienced manager Harry Redknapp can get the best out of him and if he gets the service he needs to thrive on.

The 24-year-old will always be a danger from balls over the top and could be a big threat playing off a target man, but he also needs quality through balls, the kind Sánchez played in Chile´s World Cup warm-ups, if he´s to shine.

Perhaps Redknapp needs to speak to Chile boss Jorge Sampaoli to find out how to get the best out of the much-travelled striker.
It was when Sampaoli and Vargas were at Universidad de Chile that the speedster really started to carve out a name for himself. His goals proved crucial as la U won the Copa Sudamericana in 2011 and earned him a big-money move to Napoli.

However, his career has never taken off at the Italian club and he has since been hawked around on loan at Brazil´s Gremio, Spain´s Valencia and now England´s QPR.

While his club form has been fairly average in recent years, Sampaoli has got more out of him at international level, where he performed well in the World Cup qualifiers and friendlies.

Vargas scored just once in the World Cup, in the historic 2-0 victory against Spain, but showed enough glimpses of his talent to attract transfer attention. He’s netted 15 goals in 34 games for la Roja.

He said: “I´m very happy to have signed for QPR. I spoke with Mauricio and he told me that it´s a good city to be in and a good club to play. In England, the football is very competitive, there are good players and I´m very excited to be here. I´m anxious to play.”

QPR boss Redknapp is convinced he´s pulled off a major coup by landing the Chilean.
“He´s a quality player,” he said. “He´s very versatile and is the type of player we´ve been looking for for some time.”

Rangers are reported to have an option to buy for 10 million euros at the end of the loan period and that could prove a snip if Vargas hits top form in west London.

At 24, the former Cobreloa striker needs to establish himself now instead of wandering from club to club on loan. However, a good season at QPR could make him a target for bigger fish in the Premier League.