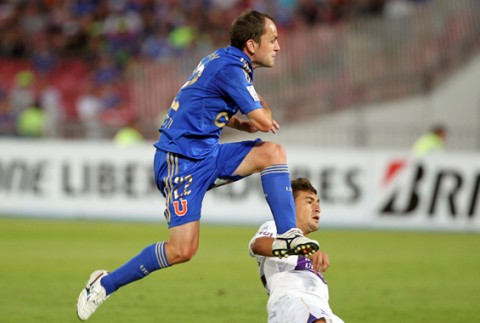 Belo Horizonte – The alarm bells were ringing after la U leaked three goals against Audax Italiano in the Clausura last Friday. And their worst fears were realised as Cruzeiro ran riot in the Group 5 clash.

A first half injury to captain José Rojas unsettled the visitors and Cruzeiro took full advantage to establish a three-goal lead. Ricardo Goulart struck twice and Dagoberto got the other as the hosts scored three times in a devastating ten-minute spell as the half came to a close.

Gustavo Lorenzetti pulled one back in the 66th minute, but it was only a temporary reprieve. Goulart completed his hat-trick in the 84th minute and substitute Willian added the fifth five minutes later.

The Argentinian said: “Cruzeiro were superior and beat us by a big margin. That is the difference between one team that prepares to be champion and another that prepares to go as far as it can.”

It means all four teams in the group, which also includes Uruguay´s Defensor Sporting and Peru´s Real Garcilaso, have three points after two matches, though la U are bottom because of their inferior goal difference.

Their next match in the competition is away to Real Garcilaso on March 11.

Meanwhile, injury-hit Unión Española face a massive test of their Copa Libertadores credentials when they host another Brazilian side, Botafogo, at Estadio Santa Laura this evening (7.45pm).

*Three Universidad de Chile players are among the five locally based players called up by Chile boss Jorge Sampaoli for the friendly against Germany in Stuttgart on March 5.

Goalkeeper Johnny Herrera plus defenders José Rojas and Osvaldo González have been named, though there are injury doubts over Rojas following the Cruzeiro game.