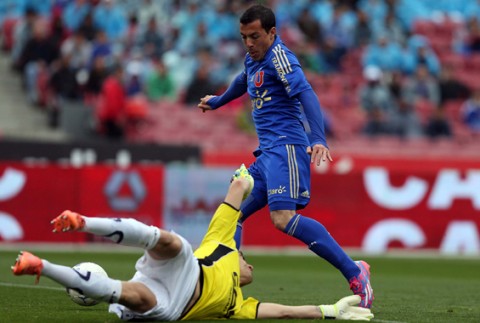 Universidad de Chile continue to lead the Chilean Apertura after a 2-1 win against Huachipato at a rain-soaked Estadio Nacional.
Following their 2-2 stumble against Iquique, la U were keen to get back to winning ways and first half goals from Sebastián Ubilla and the in-form Gustavo Canales put them in the driving seat.
However, they had to put up with a nervy finish after Lucas Simón pulled one back for the visitors with eight minutes left.
Universidad de Chile boss Martín Lasarte said: “I´m satisfied, but we finished suffering in a game that we had controlled. We deserved to win by more goals.”
Arch-rivals Colo Colo lie second, three points behind, after a comfortable 3-0 win at top-flight new-boys Barnechea at the Estadio Nacional. Esteban Paredes weighed in with two more goals, while impressive youngster Juan Delgado also netted.
However, the victory was marred by disgraceful scenes before the match when Colo Colo fans hurled seats and other missiles at the police, who were forced to run for cover.
While Universidad de Chile and Colo Colo continue to flourish, the other ‘grande’ Universidad Católica are in freefall.
Their wretched run of results continued when they lost 2-1 against Palestino at Santa Laura. Erick Pulgar gave the Cruzados an early lead, but the árabes hit back with goals from Paulo Díaz and Renato Ramos in the last 20 minutes to take the spoils.
Julio César Falcioni´s Católica have lost their last three league matches and lie 12th in the table.
Elsewhere, third-placed Santiago Wanderers, level on points with Colo Colo, had to settle for a 2-2 draw at home against Audax Italiano, while fourth-placed O´Higgins drew 1-1 at Ñublense despite playing against ten men for 40 minutes.
There were also draws between Unión Española and Universidad de Concepción (0-0), Cobreloa and Unión La Calera (1-1) and Cobresal and San Marcos de Arica (0-0).
Antofagasta moved off the bottom of the table with a hard-fought 1-0 win against Iquique in a match with three red cards.
*Chile boss Jorge Sampaoli has called up eight domestic players for the friendlies against Mexico and Haiti in the USA on September 6 and 9.
Johnny Herrera, José Rojas and Sebastián Martínez (Univeridad de Chile), Esteban Paredes, Jean Beausejour and Juan Delgado (Colo Colo), Cristopher Toselli (Universidad Católica) and Martín Rodríguez (Huachipato).