Browsing the "US Open" Tag 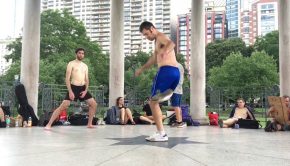 August 2019. Here are some clips from footbag players on Instagram from the past month, which saw Worlds and the