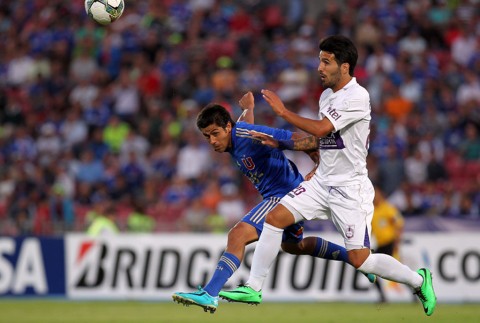 With the Clausura title out of reach, Universidad de Chile can put all their efforts into the Copa Libertadores.

Peru – The azules return to action in South America´s leading club competition with a testing away trip to Real Garcilaso, who beat Brazil´s Cruzeiro at home in their opening match. The match kicks off at 11.30pm at the estadio Huancayo.

All four teams in Group 5, which also includes Uruguay´s Defensor Sporting, have three points from their opening two games, though U de Chile are bottom because of their inferior goal difference.

Universidad de Chile defender Roberto Cereceda said: “We know that it will be a vital match. We must concentrate, play an intelligent game and take advantage of the opportunities that come our way because we´ll have the difficulty of playing at altitude.”

Like U de Chile, Unión Española aren´t in contention to win the Clausura, so they, too, can focus on the Libertadores. The rojos will have to raise their game when they travel to Argentina to take on San Lorenzo de Almagro.

Unión lie third in Group 2 with two points from two games – they drew 2-2 against Independiente del Valle, of Ecuador, and 1-1 with Brazil´s Botafogo, who top the group with four points. San Lorenzo are second with three points.

The match kicks off at 7.45pm at the estadio Nuevo Gasómetro, of Buenos Aires, tomorrow night.

Meanwhile, O´Higgins will try to continue their excellent start to their Libertadores campaign when they host Paraguay´s Cerro Porteño on Thursday night (9.15pm). The match takes place at Colo Colo´s estadio Monumental.

O´Higgins top their group with four points, while Cerro Porteño lie second. The Paraguayans come into the match in good heart after beating the Copa Sudamericana holders Lanús, of Argentina, in their last outing.

“We expect a Cerro Porteño complex, difficult and with quality players,” he said. “We will attack them as much as we can, trying to choose the best play.”