Keep your mouth shut and worry about yourself

This weekend I didn’t go to any shows at all. I never really had any desire to go. Normally if I don’t go to a show I feel like my weekend has been wasted. I did see however, the MIGHTY GREEN MACHINE tear the weakling Penrith Panthers to shreds (74-12).

These were the options for me…

On Friday night I could have gone to see Melodyssey at the Green Room. Melodyssey are a band I was pretty into 3-4 years ago, and I think they broke up a while back, but they have returned and everything I read in street press like BMA talks about their new album being so great for this “new band”. There was a time a few years back where they seemed to be supporting every band I went to see, and I ended up seeing them in a lot of different states. I used to travel round heaps, just visiting friends, going to lots of shows, but that’s not something I do so much anymore. But anyway, going to shows at the Green Room generally end up with having to catch a taxi home, and I didn’t want to do that for a show I was not particularly interested in.

The same not I got a call from a friend saying “are you going to the show tonight”. At first I wasn’t even sure what show he was talking about, but then I remembered that Pod People were playing with Bloodduster at The Basement. At the age of about 16 I was pretty excited about Bloodduster, with all their inappropriate language and humorous samples. I have seen them a few times over the years, and never really been impressed. Pod People are pretty good at what they do, but on the night it wasn’t something I was that interested in.

What I did instead was watch the Melbourne vs Manly match, that showed just how far ahead those teams are of all the other teams. It really seemed like the game was just played at a faster pace than usual. After that I went to a friends place to watch the Opening Ceremony of the Olympics. It was pretty impressive, I really enjoyed the part where the Tai Chi guys started running circle pits in both directions, that was a real highlight for me. 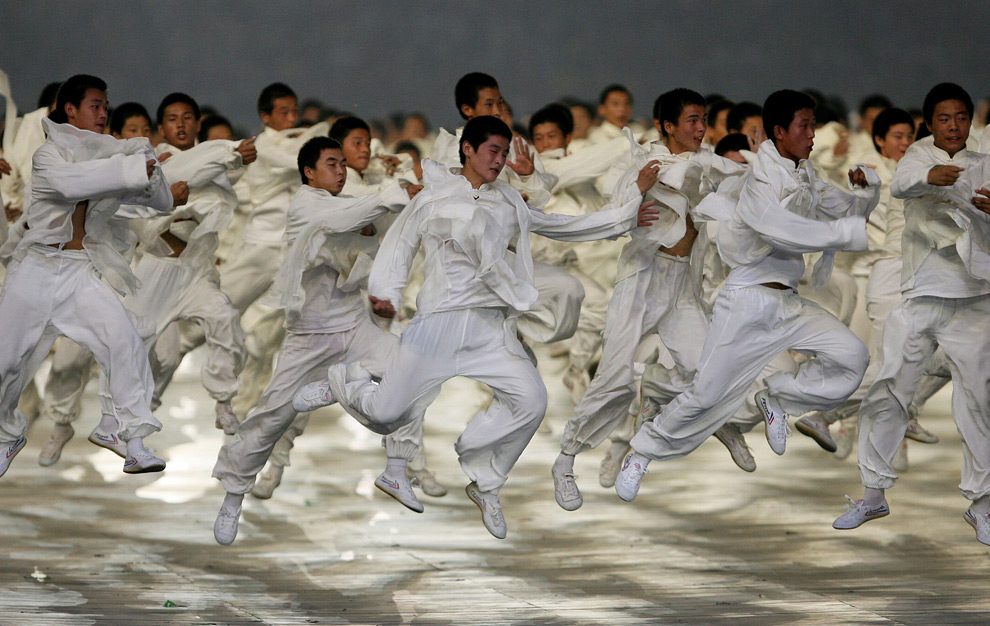 This photo is from http://www.boston.com/bigpicture/2008/08. There are a bunch of other photos on there, which were equally impressive. It’s the website of the Boston Globe.

The main part I was impressed with in the ceremony was the huge amount of people that were involved, and how they were all choreographed so well.

Anyway, I got sidetracked from talking about bands that I didn’t bother to go and see. On Saturday, Unwritten Law played at the Weston Creek Youth Centre. I don’t mind some Unwritten Law stuff, so the other day I had a look at how much tickets cost, and it was SIXTY BUCKS…for a show in a crappy youth centre…

Anyway, I didn’t go. I saw them at Soundwave last year, and I wasn’t that impressed. However, this time they were touring for some sort of money-making “best of” DVD, so maybe there would have been more “classics”. They also had in support the band Sprung Monkey. I’m pretty sure these guys were a one hit wonder with that song about “what trouble we could get into” and then it went “GET EM OUTTA HERE!!!”. I have never really heard of this band doing anything apart from that.

Anyhow, it reminded me of this time back in about 1999, so I would have been 14 or 15, and I was coming back from the beach, we were stopped at the Fish and Chips shops, and I saw a poster, Sprung Monkey were playing an all ages show at the Tathra Pub. Now growing up in this small country town, the two things you would not expect a) all ages shows and b) international bands. However, this show had happened the day before, or maybe even earlier that day, but I was too late.

Anyway, didn’t go to any of these shows, I think I made myself some good choices. These days I don’t have the feeling that I MUST BE AT EVERY SHOW etc. These days I am more about the whole thing of quality over quantity.