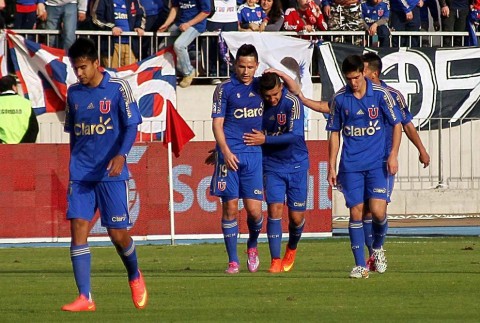 Of the four Primera División clubs with 100 per cent records going into the weekend, there is now only one remaining – Universidad de Chile.
The azules took on one of the other clubs with a perfect record, Santiago Wanderers, in the game of the weekend and came out on top 3-2 in an entertaining Apertura clash.
Gustavo Canales and Pato Rubio scored for la U, who were also boosted by an early own goal. Roberto Gutiérrez and Marco Medel, with a left-foot thunderbolt, netted for the visitors, who pressed hard in the closing stages against ten-men after Rubio was sent off for two bookings.
The two other joint leaders ahead of the weekend programme slipped to defeats at the weekend. Huachipato fell 3-1 at home against Colo Colo, who now lie second in the table, and Unión Española lost 2-1 at San Marcos de Arica.
Juan Delgado, Jaime Valdés and Emiliano Vecchio were on target for Colo Colo, while Lucas Simón replied for the home side, who were well beaten.
Emilio Renteria and Leonardo Ramos netted for San Marcos, while Fabián Saavedra pulled one back for Unión.
Universidad Católica put last week´s 1-0 defeat against Unión Española behind them with a thumping 5-1 victory against Cobreloa. Ex-Huachipato striker David Llanos struck twice, while winger Mark González, who scored one, was in inspired form.
O´Higgins and Palestino both let two-goal leads slip in their matches against Universidad de Concepción and Ñublense respectively and had to settle for 2-2 draws.
Audax Italiano overcame bottom side Barnechea 3-1 despite a wonder goal from the visitors´ Nicolás Maturana, while Iquique and Cobresal drew 2-2 at the Tierra de Campeones.
The third round had kicked off at Unión La Calera on Friday night with a 3-1 win for the home side against Antofagasta. Leandro Benegas was on target again for La Calera and now tops the scoring charts with four goals.
*In the Primera B, Everton kicked off with a solid 2-0 home victory against Coquimbo in Valparaíso.
The other results were: La Serena 0 San Luis 1, Deportes Concepción 2 Curicó Unido 1, Unión San Felipe 1 Deportes Copiapó 1, Iberia 3 Santiago Morning 1, Deportes Temuco 2 Lota Schwager 1.